Nigeria: Six Jihadists Arrested for Planting Bombs in a Church

How many churches must be destroyed in the name of Allah before we can have an open, honest discussion about what Allah commands? 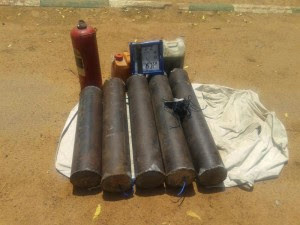 Nigeria—Six suspected Boko Haram members were arrested in Imo State in the early hours of Sunday inside the Winners Chapel Owerri, along Port Harcourt road, by the Imo State police command, while planting bombs in the church premises.

According to an eye witness account, the security personnel attached to the church noticed strange movements within the church premises and monitored their movements.

The security men alerted the senior pastor of the church, Moses Oyedele who instructed them to alert the police which they did and the Police immediately rushed to the scene with soldiers and other security agents.

In the process, it was discovered that about six suicide bombers have taken over the church perpetrating their nefarious activities.

When interrogated the suspects confessed to be suicide bombers who had stormed the state with the intention of bombing five churches within the state. (Continue Reading.)

Email ThisBlogThis!Share to TwitterShare to FacebookShare to Pinterest
Labels: Nigeria

David, did you ever post your France debates?
Thanks

If you could email me and let me know, I'd appreciate it...thanks, brother.

David, I suppose the answer to the question you asked at the beginning of this post really lies in whether we can convince Obama or his successor to face up to Islam. Until then, I suppose we can only continue to pray. At this juncture, I can see only the US president as having the influence and clout to lead the tackling of the Islam issue. The UK PM can influence things to some degree, but it's not the same is it?