Girls are being kidnapped and raped in Nigeria. Christians are being horribly oppressed in Pakistan. Al Qaeda is rapidly subjugating Iraq. Syria is being laid waste by jihadists. And Muslims are going door to door in Kenya killing non-Muslims.

Are we allowed to have an open, honest discussion about Islam yet? 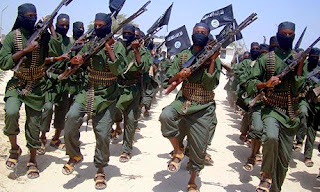 Associated Press—The gunmen went door to door in the Kenyan costal town, demanding to know if the men inside were Muslim and if they spoke Somali. If the extremists did not like the answers, they opened fire, witnesses said on Monday.

Al-Shabab, a Somali al-Qaeda-linked group, claimed responsibility for the hours-long assault on Mpeketoni in which 48 people were killed. The attack began Sunday night as residents watched World Cup matches on TV and lasted until early Monday, with little resistance from Kenya's security forces.

After daybreak, Kenyan troops and residents stared at the bodies lying on dirt streets by still-smoldering buildings. Two hotels and many vehicles were set on fire.

The attack highlights the growing incidents of Islamic extremist violence in a country that was once viewed as the bastion of stability in East Africa, drawing tourists from around the world for safaris and beach holidays. The U.S. ambassador made Kenya's entire coastal region off-limits for embassy employees after the attack.

The merciless life-or-death religious assessment recalled al-Shabab's attack on an upscale mall in Kenya's capital, Nairobi, last September in which at least 67 people were killed, some of them after not being able to answer questions about Islam. (Continue Reading.)

Email ThisBlogThis!Share to TwitterShare to FacebookShare to Pinterest
Labels: Al-Shabaab

A barbaric nut case of a religion called Islam. The world has to confront this satanic entity before it is too late. Because Islam is evil it will never triumph over good. God is on the throne and Islam will be defeated.

It is the height of deception to call Islam a religion of peace. Only fools will perpetuate that lie.

Any intelligent human being making the declaration that Islam is a religion of peace should have to have their head examined. After the events of the last few weeks and days I believe it has become rather apparent that Islam is a barbaric satanic cult of death.