Jihadists in Iraq Going Door to Door Searching for Wives

Our Muslim friends in the West like to tell us that Islam promotes women's rights and equality. Funny how reality never lines up with what we're told. 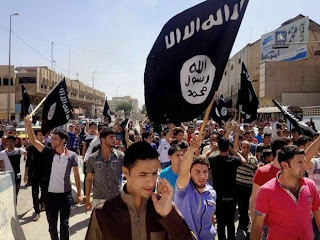 Iraq—The Iraqi army and the Islamic State of Iraq and the Levant (Isis) are battling for control of Iraq’s largest refinery outside Baiji north of Baghdad, with each side holding part of the complex. But in the town of Baiji itself, a few miles away, which is completely under the control of Isis, residents say they are most frightened by Isis militants going door to door asking about the numbers of married and unmarried women in the house.

“I told them that there were only two women in the house and both were married,” said Abu Lahid. “They said that many of their mujahedin [fighters] were unmarried and wanted a wife. They insisted on coming into my house to look at the women’s ID cards [which in Iraq show marital status].”

Isis says its men have been ordered not to bother local people if they are Sunni, but in many places they are imposing their puritanical social norms in the towns they have captured. In Mosul people were at first jubilant that Isis had removed the checkpoints that for years had made movement in the city very slow.

Merchants and farmers were ordered to reduce the prices of their goods. But tolerance and moderation on the part of Isis is intermittent and may be temporary. In one case in Mosul a woman was reportedly whipped, along with her husband, because she was only wearing a headscarf rather than the niqqab cloak covering the whole body. In some captured towns fanatical Isis militants start imposing rules about women’s clothing, watching TV in coffee shops and cigarette smoking almost before the fighting is ended.

The restraint, or lack of it, shown by Isis has important political implications. When al-Qa’ida in Iraq, the forerunner of Isis, insisted on local women marrying their fighters during the Sunni-Shia civil war between 2004 and 2008, they alienated much of the Sunni community. They killed even minor government employees. “I would rather have my door kicked in by American soldiers than by al‑Qa’ida because, with the Americans, I would stand a better chance of staying alive,” a young Sunni man in Baghdad said at the time. Such feelings enabled the Americans to create Sahwa, an anti-al-Qa’ida force among the Sunni. (Continue Reading.)

Why do you use the word 'Jihadist'?

Surely this is a word invented by the media to distinguish them from 'mainstream' Muslims.

We all know they are simply following what the Koran tells them, why not call them Muslims?

"Jihadist" is simply the english translation of the word "mujahid" (fighter in the way of jihad).

You're saying that the media invented the word "mujahid"? Do you believe that the media also invented a time machine to go back in time and insert this word into Muslim sources?

"Our Muslim friends in the West like to tell us that Islam promotes women's rights and equality. Funny how reality never lines up with what we're told..."

Unfortunately it's not only our "Muslim friends" who tell us that, but also our "non-Muslim ennemies within" i.e. cowardly, vote-hunting politicians, the media, the Left, and yes certain self-proclaimed "Feminists".