Not long ago, the Obama Administration assured us that the War on Terror was coming to an end. Today, Al Qaeda conquered Iraq's second largest city. Feeling safe yet?

WASHINGTON – A major outbreak of violence and unrest in northern Iraq – where Al Qaeda-aligned insurgents effectively toppled the country's second-largest city – is fueling concerns in Washington that security is rapidly deteriorating, a little more than two years after U.S. troops left the country.

The city of Mosul fell to Al Qaeda-affiliated militants on Tuesday. The White House and State Department condemned the five-day escalation of violence in the oil-rich region “in the strongest possible terms.”

White House spokesman Josh Earnest said the bloodshed “has led to a serious deterioration of the security situation in that city.”

“The situation is extremely serious, and U.S. officials in both Washington and Baghdad are tracking events closely in coordination with the government of Iraq,” Earnest said.

The tone at the State Department shifted considerably from a day earlier, when spokeswoman Marie Harf downplayed the situation. “I don’t get the sense that they’re gaining a lot of territory,” Harf said Monday at a press briefing.

On Tuesday, spokeswoman Jen Psaki said the violence showed how fragile the security in Iraq had become. She said the U.S. is "deeply concerned" about the unrest in Mosul, blaming the situation in part on the Al Qaeda-tied Islamic State of Iraq gaining strength from the civil war in Syria.

The deterioration in Mosul sent up red flags about the lack of sustained stability in a country where the U.S. has spent more than $1.7 trillion over eight years.

Republican Sen. John McCain said the takeover of Mosul was a reflection of President Obama’s failure to leave a U.S. force in Iraq to help assure stability. He said the latest surge in sectarian violence, along with the stunning collapse of security forces in Mosul, may be a warning sign of what’s to come when American troops pull out of Afghanistan later this year.

“There’s no doubt that we could have left troops behind, as we have in Korea and Germany and Bosnia, and didn’t, and so it is now chaos, and so you will see greater and greater attacks and ... chaos in Iraq,” McCain told reporters, according to Reuters. (Continue Reading.) 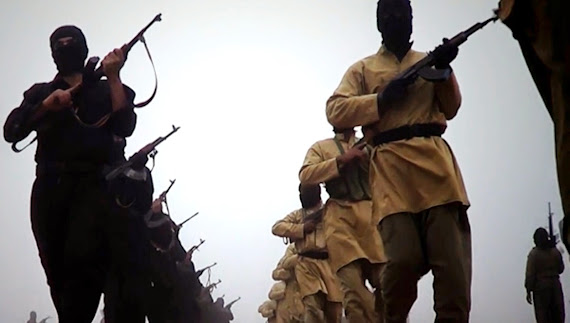 the only solution Mr D is for iraq to leave islam....

as long as there doing it there and not here. I say All-do-to-allah

This is a bigger much bigger then ISIS. It is actually looking like this is a well coordinated insurrection led by Sunni members of the current and former regimes.

This is USA mistake.
If you would'nt have been Irak for fake mass destruction weapons, it would'nt be a such threat.

Thank you, Mr. Obama, for all you've done in your presidency to subversively strengthen the hand of militant Islam and those who hate Israel and America. Not that American troops would stop Muslims who take Muhammad's command for Jihad seriously. Only the end of Islam would do that.

To be very honest, the global prognosis looks very bleak and disappointing. The only optimism I draw is the hope that when the terror expansion reaches its inflexion point, we have the Son of Man coming with the clouds of heaven....

Devotee of Christ, I share your sentiment. It could be the Son of Man coming, or if he still doesn't, then this thing has to come to a head. I suppose if there is going to be a next world war, it won't be fought simply between one country on another but on pro- and anti-Islam. Then again, where would the US stand if such is the case, now that they have a Muslim (who claims to be a Christian) as president? That is why I feel the next POTUS has to be strong enough to stand up to Islam and expose it for what it really is. I am not saying it is easy to do, because Islam is the cult with the biggest following of one and a half billion people. He/she would be offending this group on a global scale, and will be seen as opening up a can of dragons. But then again, if the truth is exposed on a big scale, who is to say we would not be turning over some Muslims too to Christ? The truth will set them free, to those who listen to His voice. To the Muslims then, it is an issue of, "Do I want to follow the true God and abandon 'la ilaha i Allah' or do I love this demon Allah and his slave Muhammad too much to leave them?"


Thanks for providing the information with this post. Post is very nice! By the way, I want to share with you information about the best.we are providing epson printer repairing services if you are face any problem you can visit our site. https://www.epsonprintersupport247.com/fix-epson-printer-offline/ and more information dial toll free UK: +44-808-164-5280 and USA: +1-888-633-7151

Thank you so much to providing these kind information. For more imformation visit: www.norton.com/setup

Are your COX emails out of control? Looking for help with your email support? We provide technical support for problems linked to CoxEmail that may arise with you. Don’t worry if, while working on cox, you see any error messages on your screen. We are extremely trained and experienced engineers who will solve your problems in no moment. We provide assistance for 24* 7 days and respond to your call whenever you face any cox services problem. We believe in securing your account, personal and banking information so that if you can’t generate one, you should have a hack-proof password by calling us Cox Email setting Support phone NumbersUSA +1-888-227-2108.To know more information about our services,
Click the Web link... http://mailproblemhelp.mystrikingly.com/blog/how-to-setup-cox-net-email-on-iphone-or-cox-email-server-settings-for-iphone

Conversations and dates I've had with men on wellhello were very good to excellent matches for me. I felt safe with my dates and they were respectful of my boundaries. Being my favorite, this dating site is no different than the rest in that we have to be very careful about who and how much we choose to trust and who we choose to date.

We have a year of the best experience in tutoring and providing to the student of the USA and most of our assignments help students are having professional experience in their respective fields. Biology Dissertation Help

Unlike at home or in assignments, one of the main concerns at examination hall is your speed. Also, no English Homework Help services or writers can save you while writing an examination paper. You are your only hope, and you have to become your only saviour in such situations. However, you can get tips and tricks from various places to write well or writing faster in exams. But reading some tips and moving onto another won’t help. You have to read and understand for yourself that what will work best for you. So, here are some practical and proven suggestions to help you accelerate your essay writing.
Do consistent practice even without any exams
One cannot master any skill in a single day. It is always a yearlong process and takes every drop of sweat and blood to excel in a skill. So, you have to habituate yourself to do more of what you once lost. Only then you can expect positive results. Therefore, if you are wondering how I can word counter at optimum speed the answer is to practice optimum. The regular and thorough practice has helped several people do the unimaginable. It will work the same for you. The more you do essay writing at home, the less time you require to write your next essay.
Take the advice of your teachers and experts
Your teachers have already crossed the hurdles you are facing now. Also, nothing talks louder and clearer than experience. So, they will be your best guide to any issues you face in your academic life. You will not even require any subject-specific or an expert in a particular field to guide you about speeded writing. You can talk to any teacher any professional essay writer you get for advice to write faster in exams. They might also help you to ace your writing skills and deliver qualitative essays. However, it is on you to remember and follow those pieces of advice. You will sure get expected results if you do.
Divide your total duration for each section of question paper
All the questions in an examination are of equal importance. You cannot focus on anyone for longer and neglect the other. So, the key is to make a prior time division to each of the sections in the question paper. This is the same as the top-notch university assignment help with their massive quantity of tasks. They start at the earliest and strategize their timing to manage timely delivery for all their clients. You can also write the time division for each section in your question paper and work accordingly. Then start writing an essay while keeping the time record in your head. Then, work smarter to write maximum and meaningful sentences in that time frame.
Read maximum you can
Ultimately and above all tips and tricks, it is all about how much you read. The more you read, the more you will be writing in your exams. Humans tend to take longer when they cook their own stories to write. However, it also happens when you know less or negligible about a particular topic. But, you do not have to face such a situation if you are a consistent reader. Any professional Dissertation help service ever is only being recognized due to their excellent research and reading skills. Nothing and no one can speed up your writing if you do not know what to write.
Summary
It is not enough to write everything in the exam. You will only excel if you write all within the time duration of the exam. However, essay writing requires a lot of thinking and creativity. But, it will eventually develop if you keep practising and follow the above points.

Assignment Help Service is a well-known essay writing service company that provides skilled proofreading service . to students from all around the world, assisting them with writing difficulties. The website has established itself s the most promising dissertation writing service during the course of its more than ten years of existence. You may contact them if you need help with any academic work.