The world recently saw video footage of dozens of Boko Haram kidnapping victims professing their new "faith" in Islam. Why would these girls convert to Islam, the religion that allows men to take female captives and rape them? They converted to Islam hoping that their Muslim captors would stop raping and torturing them. Those who refused to convert were raped and beaten nearly to death, then left for dead in the Nigerian sun.

Welcome to the version of Islam that we read about in Islam's most trusted sources. 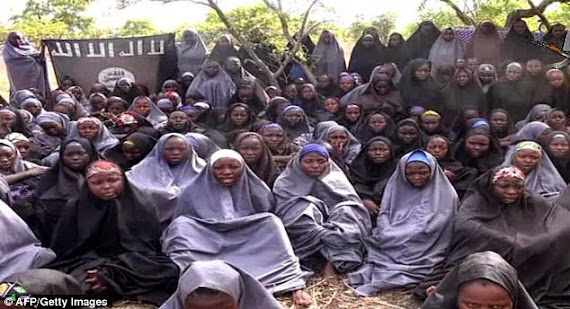 Daily Mail—Their faces scratched and bleeding, the pitiful remains of their once-smart school uniforms ripped and filthy, the two teenage girls were tethered to trees, wrists bound with rope and left in a clearing in the Nigerian bush to die by Islamist terror group Boko Haram.

Despite having been raped and dragged through the bush, they were alive – but only just – in the sweltering tropical heat and humidity.

This grim scene was discovered by 15-year-old Baba Goni. ‘They were seated on the ground at the base of the trees, their legs stretched out in front of them – they were hardly conscious,’ says Baba, who acted as a guide for one of the many vigilante teams searching for the Nigerian schoolgirls abducted from their school last month by Boko Haram – and now at the centre of a concerted international campaign for their freedom.

The horrific scene he and his comrades encountered, a week after the kidnap early on April 15, was in thorny scrubland near the village of Ba’ale, an hour’s drive from Chibok, where 276 girls aged 16 to 18 were taken from their boarding school dormitories – with 223 still missing. It was still two weeks before social media campaigns and protests would prick the Western world’s conscience over the abduction.

In the days following their disappearance, rag-tag groups such as Baba’s, scouring the forests in a convoy of Toyota pick-up trucks, were the girls’ only hope. But hope had already run out for some of the hostages, according to Baba, when his group spoke to the terrified inhabitants of the village where Boko Haram had pitched camp with their captives for three days following the kidnap.

The chilling account he received from the villagers, though unconfirmed by official sources, represents the very worst fears of the families of those 223 girls still missing.

Four were dead, they told him, shot by their captors for being ‘stubborn and unco-operative’. They had been hastily buried before the brutish kidnappers moved on.

The tiny rural village, halfway between Chibok and Damboa in the besieged state of Borno in Nigeria’s north-east, had been helpless to stop the Boko Haram gang as it swept through on trucks loaded with schoolgirls they had taken at gunpoint before torching their school.

Venturing further up the track, Baba and his fellow vigilantes found the two girls. Baba, the youngest of the group, stayed back as his friends took charge.‘They used my knife to cut through the ropes,’ he said. ‘I heard the girls crying and telling the others that they had been raped, then just left there. They had been with the other girls from Chibok, all taken from the school in the middle of the night by armed men in soldiers’ uniforms.

‘We couldn’t do much for them. They didn’t want to talk to any men. All we could do was to get them into a vehicle and drive them to the security police at Damboa. They didn’t talk, they just held on to each other and cried.’ (Continue Reading.)

any fatwa on david wood?

It's a great complimentary if we called this atrocity as Animal Behaviour!