Ahmadis are horribly persecuted by orthodox Muslims in places like Pakistan and Indonesia. Oddly enough, when Ahmadis flee Muslim countries and move to Western nations that protect them, they often become some of the most vocal critics of anyone who claims that Islam promotes violence against religious minorities. 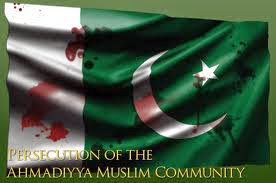 Reuters-A teenager walked into a Pakistani police station on Friday and shot dead a 65-year-old man from a minority sect accused of blasphemy, their spokesman said, the second murder involving the country's controversial blasphemy laws in as many weeks.

Rights activists said the attack, and a spike in the number of blasphemy cases, was evidence of rising intolerance in the mainly Sunni Muslim South Asian state of 180 million people.

Victim Khalil Ahmad was a member of the minority Ahmadi community, a sect who say they are Muslim but whose religion is rejected by the Pakistani state.

Ahmad and three other Ahmadis had asked a shopkeeper in their village in central Pakistan earlier this week to remove inflammatory stickers denouncing their community, said Saleem ud Din, a spokesman for the Ahmadi community.

In retaliation, the shopkeeper filed blasphemy charges against the four men on May 12. Ahmad, a father of four, was in police custody when the teenage boy walked in, asked to see him, and shot him dead, Din said.

He said police told him that the shooter, a high school student, had been arrested.

Din said the lapse in security would have to be investigated. Pakistani police are notoriously poorly trained and security is often lax, critics say. (Continue Reading.)

And let's see if charges are filled and what judgment is decided against the youth who shot this man dead...