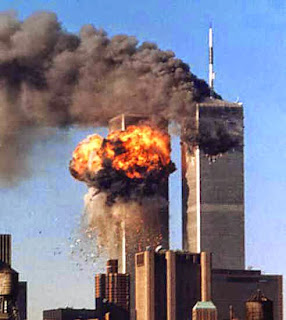 Politicians and the media constantly assure us that the unimaginably vast majority of Muslims condemn terrorist attacks, and that the only reason we even notice the tiny minority of Muslim extremists is that we're a bunch of Islamophobic bigots who want to make Islam look bad.

But reality doesn't always line up with the fantasies of politicians and the media. For instance, a 2003 poll showed that 59% of Indonesian Muslims and 56% of Jordanian Muslims supported Osama bin Laden. (Note: those are majorities, not tiny minorities). Fortunately, support for bin Laden fell considerably after 2003, but his popularity could never be deemed insignificant by any standard.

Even more disturbing, support for terrorist attacks is surprisingly high even in Western nations. In a 2006 poll, for example, nearly a quarter of British Muslims said that the 7/7 subway attacks were justified because of Britain's involvement in the "War on Terror." (Note: the 7/7 attacks targeted civilians.)

Some Muslim apologists also suggest that terrorist attacks against Western targets are justified in Islam. Yahya Snow went so far as to defend Al Qaeda's promise to "eliminate the cross" by destroying America, "the bearer of the cross." Yahya justifies the attacks by saying exactly what Al Qaeda says, namely, that terrorist attacks against America are America's fault for interfering in Muslim countries. 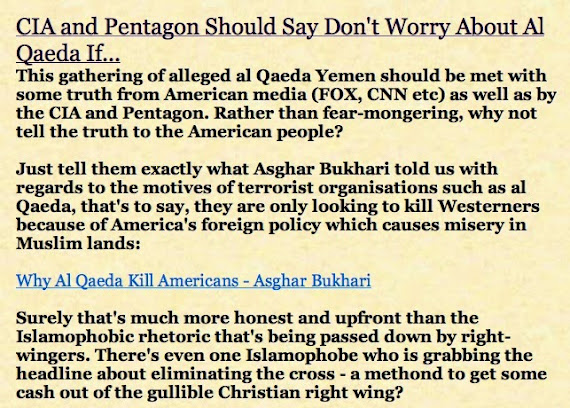 Of course, as far as Islamic doctrine is concerned, Yahya is entirely correct. Qur'an 5:33 commands Muslims to kill or crucify those who "make mischief" in Muslim lands (with lesser penalties for lesser crimes). According to Muhammad (see Sunan Ibn Majah 2759 and Sahih al-Bukhari 2843), anyone who financially supports a soldier (e.g., by paying taxes) is to receive the same reward as the soldier. Hence, if the penalty for American soldiers who interfere in Muslim lands is death, then American taxpayers (even civilians) are to receive the same penalty.

Since Yahya is now partners with Ijaz Ahmad, can we assume that Ijaz also agrees with Al Qaeda?
Posted by David Wood at 7:08 PM

He is also now defending Muslims trying to get Easter Egg hunts banned in Dearborn. He is quite proud of the Mujahadene Iron Tails lol

David movie idea. you could redo some of the old Here Comes Peter Cottontail. And have speeches from Jihadi Muslims doing a voice over for Iron Tail lol

Peace and blessings of our risen LORD JESUS CHRIST on all!
yahya snow! You're a pathetic Muslim.You want American media to be true. Why don't you tell the truth for once? Tell us the truth about your religion. Al-qaeda is a terrorist organization, period. I don't know how you missed that fact. Take your taqiyya goggles off and see it for what it is. Al-qaeda is killing EVERYONE in Pakistan, Afghanistan, Iraq and most of the middle east where they have power. Sunni, shia, Christian,hindu, sikhs, ahmedis ....everyone. Even by Pakistani standards they are a terrorist organization. Why do you have to stoop to such a low level everytime?. You are disgusting. And tell you're friends bukhari that read the newspaper. Al-qaeda is not only killing American but EVERYONE. EVERYONE. i don't even know how else to make it any simple. In the video you're hero (al-qaeda leader) can be cheeky heard saying that he wants to fight the CROSS. the CROSS ofJESUS CHRIST. if you don't speak the language than get someone to translate it for you. and apparently America is the bearer of CROSS. I don't know how but your hero thinks so. THATS why they wanna kill Americans. Stop lying to American people and stop being a victim.

Someone should report him to the authorities for supporting terrorism.

"Yahya justifies the attacks by saying exactly what Al Qaeda says, namely, that terrorist attacks against America are America's fault for interfering in Muslim countries.
"

Yahya can cry me a river and see if i care. His asinine logic fails to explain cases like Germany, Italy or Japan. Germany, Italy and Japan had far more interference form US than any muslim country ever will. Why aren't they infernal third world hell-holes with abysmal human rights records, like any average muslim majority country? Care to explain that, mr Yahya?

While i don't believe that US presence in muslim countries is the cause of terrorism (Barbary Wars, anyone?), I do agree that the US should cease any involvement with muslim countries. That includes not only military presence but also financial aid who that ends up getting in the hands of what the establishment refers to as "the bad guys" (sorry Pakistan, no more jizya for you!).

And Yahya, if you're reading this and you do decide to cry me a river, you're supposed to build a bridge and get over it, not build a bridge, live under it and charge crossing fees.

apparently yahya snow is saying he is not justifying terrorism. any now saying David is lying against him

But too bad for him the Islamic doctrine makes him inconsistent. because as David pointed out surah Qur'an 5:33, Sunan Ibn Majah 2759 and Sahih al-Bukhari 2843