Christians in the Middle East are experiencing precisely the sort of oppression promoted by Muhammad and the Qur'an. When these Christians speak out, they are abused or killed. This means that their only advocates are people like us. But when we speak on their behalf, we're labeled "racists," "bigots," and "Islamophobes." 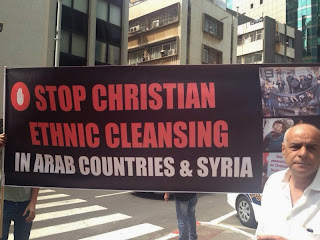 Wall Street Journal—This week, as Jews celebrate the Passover holiday, they are commemorating the Bible's Exodus story describing a series of plagues inflicted on ancient Egypt that freed the Israelites, allowing them to make their way to the Holy Land. But over the past century, another exodus, driven by a plague of persecution, has swept across the Middle East and is emptying the region of its Christian population. The persecution is especially virulent today.

The Middle East may be the birthplace of three monotheistic religions, but some Arab nations appear bent on making it the burial ground for one of them. For 2,000 years, Christian communities dotted the region, enriching the Arab world with literature, culture and commerce. At the turn of the 20th century, Christians made up 26% of the Middle East's population. Today, that figure has dwindled to less than 10%. Intolerant and extremist governments are driving away the Christian communities that have lived in the Middle East since their faith was born.

In the rubble of Syrian cities like Aleppo and Damascus, Christians who refused to convert to Islam have been kidnapped, shot and beheaded by Islamist opposition fighters. In Egypt, mobs of Muslim Brotherhood members burn Coptic Christian churches in the same way they once obliterated Jewish synagogues. And in Iraq, terrorists deliberately target Christian worshippers. This past Christmas, 26 people were killed when a bomb ripped through a crowd of worshipers leaving a church in Baghdad's southern Dora neighborhood. 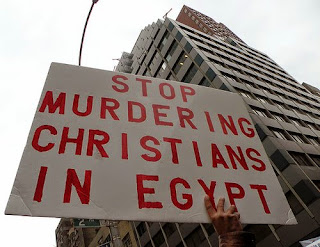 Christians are losing their lives, liberties, businesses and their houses of worship across the Middle East. It is little wonder that native Christians have sought refuge in neighboring countries—yet in many cases they find themselves equally unwelcome. Over the past 10 years, nearly two-thirds of Iraq's 1.5 million Christians have been driven from their homes. Many settled in Syria before once again becoming victims of unrelenting persecution. Syria's Christian population has dropped from 30% in the 1920s to less than 10% today.

In January, a report by the nondenominational Christian nonprofit organization Open Doors documented the 10 most oppressive countries for Christians; nine were Muslim-majority states noted for Islamic extremism, and the 10th was North Korea. These tyrannical regimes uphold archaic blasphemy and defamation-of-religion laws under the guise of protecting religious expression. In truth, these measures amount to systematic repression of non-Islamic groups.

Last year in Saudi Arabia, two men were prosecuted for the "crime" of converting a woman to Christianity and helping her flee the Islamic kingdom. According to the Saudi Gazette, one of the men, a Lebanese, was sentenced to six years in prison and 300 lashes, and the other man, a Saudi, was sentenced to two years and 200 lashes. Those are relatively mild sentences in Saudi Arabia, where conversion to another religion is punishable by death.

The "justice system" in other Islamic nations is not particularly just for Arab citizens, but it is uniquely oppressive for Christians. Radical Islamists in the northern Syrian city of Raqqa are using an ancient law called the "dhimmi pact" to extort local Christians. The community is faced with a grim choice: pay a tax and submit to a list of religious restrictions or "face the sword." (Continue Reading.)

One wonders what would happen if in the western world Muslims were told that Saudi religious bigotry was to be applied to Muslims by non Muslims?

Here is a man who sees the threat of Islam, check it out ...

My name is Paul Weston, and I am a racist

Wow... Talking about making Jesus a 'zealot'. Not suprising though, coz we always saw how violence in Quran & Hadith been tried to be re-inteprated, watered down & soft-sounded...

@Syed Sye: Once again, as it is time and time against with Muslims, they can't defend the violent actions of Mohmmad, so they make false tu quo que accusations about Jesus saying and doing things he never said, or accusing Christians of violence, as if the violence they do that is in no way justified in Christ's teachings can logically put blame on Christianity. In short, it's more Muslim dishonesty.

So, what do you think of muslims who follow islamic orthodoxy and teach hate of non-muslims?

Where in the Bible is that? Certainly you wouldn't be lying or making stuff up, would you now?

"One wonders what would happen if in the western world Muslims were told that Saudi religious bigotry was to be applied to Muslims by non Muslims?"