Boston Marathon Bomber Dzhokhar Tsarnaev: "There Is But One God, Allah, and Muhammad Is His Messenger"

Police were closing in on Dzhokhar Tsarnaev, and he knew he might get killed. So he used what could have been his last moments hiding under a boat to scrawl a message for the world: "There is but one God, Allah, and Muhammad is his messenger." Yet Tsarnaev's terrorist attack at the Boston Marathon had nothing to do with Islam, right? 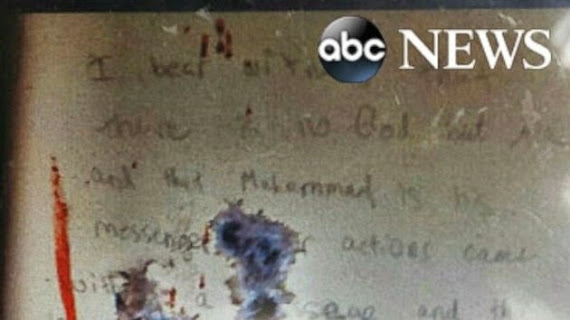 ABC News—A new image shows the bullet-riddled anti-American rant allegedly scrawled by suspected Boston Marathon bomber Dzhokhar Tsarnaev on the inside wall of a boat as he hid from a police manhunt last year.

“The U.S. government is killing our innocent civilians, but most of you already know that… I can’t stand to see such [bullet hole] go unpunished,” says the handwriting captured in the image obtained by ABC News from a law enforcement official in Massachusetts. “We Muslims are one body. You kill one of us, you hurt [bullet hole] us all.”

Along with bullet holes that interrupt Tsarnaev’s message, the image shows drips of red liquid on the wall, which could be paint or, officials said, blood. Dzhokhar had been injured in a firefight with police hours before – the same firefight that took the life of his older brother and alleged co-conspirator Tamerlan Tsarnaev.

ABC News has previously reported Tsarnaev wrote an anti-American message on the boat, called the Slip Away II, in which he hid during the massive manhunt last April. Law enforcement sources previously said that the message also included the phrase “F*** America”. That portion of the message was not included in the image obtained by ABC News. This week law enforcement sources said Dzhokhar also lamented elsewhere in the note that his brother was able to meet Allah first.

David Bruck, a member of Tsarnaev’s defense team, had no comment when he was shown the photograph Wednesday. In a pre-trial hearing Wednesday he repeated arguments made in court filings that Tamerlan was ultimately responsible for last year’s terror attacks. Previous filings indicated the defense may argue in Dzhokhar’s November trial that the 19-year-old was only doing his older brothers’ bidding.

“If the government’s indictment is true, this [case] is about a family,'' Bruck said, adding, "a story of this family and the relationships between the people in."

Dzhokhar has pleaded not guilty to 30 counts related to the dual explosions at the Boston Marathon finish line last year. The blasts killed three people, including an 8-year-old boy, and injured some 260 others.

The bombings also kicked off an enormous investigation in and around Boston during which, three days after the bombing, the FBI released surveillance images of the Tsarnaev brothers, who had not yet been identified, as suspects numbers one and two in the case.

Hours after the photos were released the Tsarnaev brothers allegedly ambushed and killed MIT Police Officer Sean Collier and then carjacked a man. A high-speed chase escalated into a firefight where the suspects hurtled bombs at the police on the streets of nearby Watertown.

Authorities say Dzhokhar at least partially contributed to Tamerlan’s death during the firefight when Dzhokhar hit his brother with a vehicle during his getaway. Dzhokhar temporarily disappeared, only to be discovered in a boat sitting on land in a local resident’s back yard.

While injured, authorities say Dzhokhar had taken the time to write on the walls of the boat in black pen. When authorities arrived, a bloodied Dzhokhar surrendered.

Based on the image obtained by ABC News, he begins the message with the Muslim statement of faith, saying that there is but one god, Allah, and Muhammad is his messenger.

Aside from the aforementioned legible messages, much of the rest of the note in the image is unintelligible due to the red liquid, bullet holes and fading ink. (Source)

Not sure if anyone else has spotted it but the second perpetrator hid in a boat called: "Slip Away II"?
Anyway, My prayer for each and everyone of us is a Bible Verse and it's this one:
Philippians 4, 4-7 (KJV)
(4) Rejoice in the Lord always: and again I say, Rejoice.

(5) Let your moderation be known unto all men. The Lord is at hand.

(6) Be careful for nothing; but in every thing by prayer and supplication with thanksgiving let your requests be made known unto God.

(7) And the peace of God, which passeth all understanding, shall keep your hearts and minds through Christ Jesus.
Mad God Bless one and all!
Anthony - Birmingham - UK