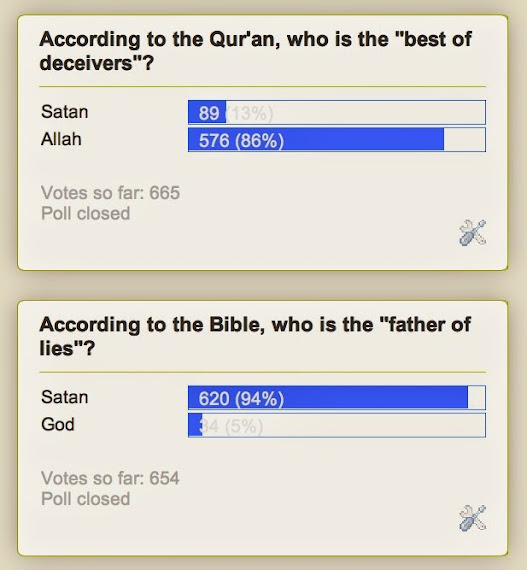 By contrast, the Bible claims that Satan is the father of lies (John 8:44).

Humaid b. 'Abd al-Rahman b. 'Auf reported that his mother Umm Kulthum daughter of 'Uqba b. Abu Mu'ait, and she was one amongst the first emigrants who pledged allegiance to Allah's Apostle (may peace be upon him), as saying that she heard Allah's Messenger (may peace be upon him) as saying: A liar is not one who tries to bring reconciliation amongst people and speaks good (in order to avert dispute), or he conveys good. Ibn Shihab said he did not hear that exemption was granted in anything what the people speak as LIE but in three cases:in battle, for bringing reconciliation amongst persons and the narration of the words of the husband to his wife, and the narration of the words of a wife to her husband (in a twisted form in order to bring reconciliation between them).

John 8:44 , Speaking to a group of Jews, Jesus says, “You belong to your father, the devil, and you want to carry out your father’s desires. He was a murderer from the beginning, not holding to the truth, for there is no truth in him. When he lies, he speaks his native language, for he is a liar and the father of lies”


1 John 2:22 ,Who is the LIAR? It is whoever denies that Jesus is the Christ. Such a person is the antichrist--denying the Father and the Son.

I had a Muslim tell me that it really means 'Best of Planners' in Arabic..Is this true?

As long as the Muslim agrees that it's the sort of "planning" that involves deception (e.g., the planning of someone who is setting out to deceive someone), then there's no problem with translating it as "best of planners." But "makr" means "deception," so there's no getting around the deception.

I have seen you take many thing out of context even though you say you don't. Next time you address something, please do not take a few seconds of research. Spend some time and you will be surprised. I was quickly able to find out your mistakes on Muhammed(pbuh) being possessed, sleeping with his maid, capturing slaves after war and raping them, his suicidal thoughts, along with many others. Please do not trick people. If you believe you are not tricking them and you genuinly believe what you are saying, spend more time and research because I know you are quickly hearing stuff from friends and not taking time to research these topics.

LOL. All right, Siam, you've just accused me of making mistakes. Let's go through them one at at time. The first one you mentioned is Muhammad thinking he was possessed. Show me my error.

You're quite right to take David Wood to task - he's forever parroting stuff from his BFFs. Especially those lying knaves al-Bukhari, Muslim and Ibn Ishaq.

Siam Yusuf said "I was quickly able to find out your mistakes on Muhammed(pbuh) being possessed, sleeping with his maid, capturing slaves after war and raping them, his suicidal thoughts, along with many others."
Can you please point those mistakes out Siam? We shouldn't be ASKING you this, it should come naturally to you to save us from these errors. We are waiting.

We speak the truth in love because not only the lord taught us to do that but also enabled us by filling his spirit of love and patience in us. Some people will be hurt but the huge question is of eternal destiny. No child of God will sit quiet since he/she knows the truth and it the truth that sets one free. Jesus said I am the truth the way and the life.

Don't wait for a response from Siam Yusuf. Muslims simply assert hings all the time...as if asserting something alone is proof of their claim.

I beleive that comment would most likely "fly" pass over his head!
:))

David you don't understand the debating techniques of your Muslim pen pal (or for that matter any other Muslim who disagrees with you and then goes silent when it's their turn to speak). From an Islamic cultural perspective they are not used to such discourse such conversations usually end in silence (i.e. decapitation). As the old saying goes: one man's decapitation is another man's cultural affirmation".

"I was quickly able to find out your mistakes on Muhammed(pbuh) being possessed, sleeping with his maid, capturing slaves after war and raping them, his suicidal thoughts, along with many others."

We all know someone like mr. Yusuf. Someone who always says how he's right and everyone else is wrong without ever explaining why. Someone who talks the talk but doesn't walk the walk. We might hear from him after Jumu'ah but, assuming he actually tries to defend muhammad instead of simply try to play the victim or go on a anti-christian rant, i suspectit will be like Ali Sina says:

"I have debated with many Muslims. Their defense of Islam can be summarized in two categories:

a- Denial of the authenticity of Islamic sources that report the stories of crimes of Muhammad (example: debate with Edip Yukssel, a leader of the Submitters)

b- Moral relativism and situational ethics, e.g., “In those days, pedophilia, assassination, rape, raid, pillage, massacre and lying, were common practices, so Muhammad is innocent because he did what everyone else was doing.” Muslims even go as far as to question the legitimacy of the Golden Rule to claim I do not have any basis to condemn Muhammad. In other words, who can say what is good and what is evil? That is up to the messenger of God to decide. (Example: debate with Yamin Zakaria)

These are the main two arguments that Muslims present in defense of Islam. Any rational person can see they are logical fallacies."

@Siam Yusuf
I Bet You $100 That Siam Yusuf Will Not Respond Because He Can't!! Everything David Wood Said is True!

Was Muhammad Suicidal?
Here is just one source from Ibn Ishaq's "Sirat Rasulallah" from Guillaume's translation, "The Life of Muhammad", [3], page 106.

"So I [Muhammad] read it, and he [Gabriel] departed from me. And I awoke from my sleep, and it was though these words were written on my heart. (Tabari: Now none of God's creatures was more hateful to me than an (ecstatic) poet or a man possessed: I could not even look at them. I thought, Woe is me poet or possessed - Never shall Quraysh say this of me! I WILL GO TO THE TOP OF THE MOUNTAIN AND THROW MYSELF DOWN THAT I MAY KILL MYSELF AND GAIN REST. So I went forth to do so and then) when I was midway on the mountain, I heard a voice from heaven saying "O Muhammad! thou are the apostle of God and I am Gabriel."

MUSLIM ARE ALLOW TO LIE IN ISLAM:
Bukhari (49:857) - "He who makes peace between the people by inventing good information or saying good things, IS NOT A LIAR."

- You See SIAM YUSUF, Lying in ISLAM is permitted!