Pat Condell: A Society of Cowards

In a courageous (but thoroughly unrealistic) effort to show the world that Islam doesn't promote violence over cartoons, Muslim parliamentary candidate Maajid Nawaz recently decided to Tweet a cartoon of Jesus and Muhammad: 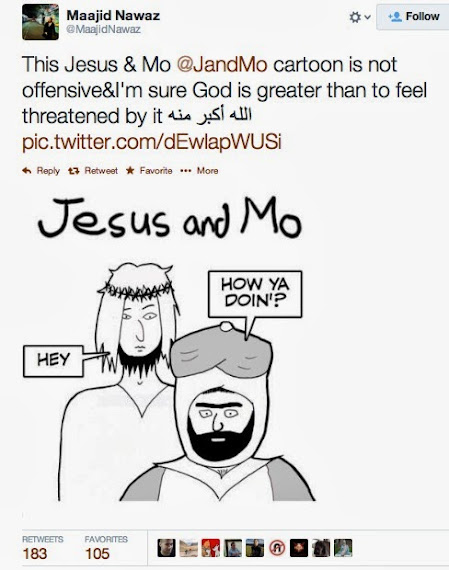 Not surprisingly, some of his fellow Muslims are now threatening to brutally murder him over his Tweet.

The Guardian—A Muslim Liberal Democrat candidate has revealed he tweeted a cartoon of Muhammad and Jesus because of his desire to speak freely without fearing a charge of blasphemy, even though it prompted death threats and calls for him to stand down.

Maajid Nawaz, who is running to be an MP in Hampstead and Kilburn, said he tweeted the image and stated he did not feel it threatened him in order to defend his religion "against those who have hijacked it because they shout the loudest".

Writing in the Guardian, the politician said his intention was "not to speak for any Muslim but myself" but he hoped it would send a message that Muslims are able to see things they dislike and remain calm and pluralist.

"My intention was to carve out a space to be heard without constantly fearing the blasphemy charge, on pain of death," he wrote. "I did it for Salmaan Taseer, the governor of Punjab who was assassinated by his bodyguard for calling for a review of Pakistan's colonial-era blasphemy laws; for Malala Yusufzai, the schoolgirl shot in the head by the Taliban for wanting an education; and for Muhammad Asghar, a mentally ill British man sentenced to death for 'blasphemy' last week in Pakistan."

The row blew up after Nawaz took part in a BBC debate where two students were wearing t-shirts depicting a stick figures of stick figure of Jesus saying "Hi" to a stick figure called Mo, who replied: "How you doin'?"

The politician, who is founder of the Quilliam Foundation, an anti-extremist think-tank, tweeted what he believes is a "bland" image and stated that "as a Muslim, I did not feel threatened by it. My God is greater than that".

This sparked a petition to have him dismissed as a parliamentary candidate, including by Mohammed Shafiq, a Lib Dem activist, and a series of death threats. (Continue Reading.)


While there should be an outcry over these death threats, our civilization has become far too accustomed to submitting to threats and intimidation to speak out in defense of free speech. Pat Condell draws attention to our cultural suicide in his latest video, "A Society of Cowards":

A Muslim and an atheist had the courage to speak out. I hope any Christians who have remained silent feel suitably ashamed and join them.

I'm not sure we can believe this Maajid Nawaz , he previously argued in a debate defending that Islam is religion of peace

although some might give Maajid credit for debating Anjem Choudry.

Yet, for me personally something is fishy concerning this guy, Maajid seems to be more of a "taqqiyist" / muslim delusionist rather than a genuine 'liberal moslem'.

Btw my deepest condolences for the "return to the Lord" of Mrs.Helena the mother of bro.Shamoun. May God give him & his family strength & comfort through His Holy Spirit

Thank u Lord Jesus that by your blood Mrs.Helena right now is in your presence beholding your Love & Glory...Amen

Carl feels that Christians have remained silent and ashamed. Really? and what do u mean by join them? im sure other bloggers will have plenty to say to your remark.

Thanks David ...
I have been isolated from the Islamic world for most of my life as a Christian in America. I met you and Nabeel at Biola ~2006 and that was my very first encounter with Christians concerned about Islam. Thanks for what you are doing.

These are good words. Although Pat Condell is not generally kind to Christians, he is a strong advocate for conservative western civilization.

Sounds like this fellow is engaging in some Muruna

I watched the "Is Islam A Religion of Peace" debate that Maajid Nawaz was involved in, with Zeba Khan, Ayaan Hirsi Ali and Doug Murray. Mr Nawaz was of course arguing on the side of Islam but what he primarily said was telling the audience to vote for "peace". I have to say of the four debaters, I like Mr Nawaz the most. IMHO he was the best speaker and he seemed really sincere in trying to bring out the "peaceful" side of Islam. He wanted the audience to "vote for peace". Then he posted this cartoon to make his point, but his fellow Muslims have debunked his notion that Islam is peaceful. They have just shown him otherwise. The purpose of this blog I believe is not to show that we hate Muslims, but that we wanted to show Muslims that... There is something so much better than Islam. Mr Nawaz, I pray for you. You don't really even have to debate for Islam that it is a religion of peace. There is ALREADY a religion of peace.
"But I tell you, love your enemies and pray for those who persecute you..." Matthew 5:44.
"...if anyone slaps you on the right, turn to them the other cheek also." Matthew 5:39.
"Father forgive them, for they know not what they do." Luke 23:34.

'Liberal' muslims are just ordinary muslims waiting for the chance to 'take over' and show their real, selfish, violent selves.
Unfortunately, Pat Condell is correct in his analysis of our society.
We just sit back and let it happen.

For a real register of the actions of the religion of peace, go to:
http://www.thereligionofpeace.com/

Read it and weep.

Am I the only one who noticed the "crown of thorns" on the head of Jesus in the cartoon? Apparently someone is allowing societal influence over his religious book's teachings.