After converting to Islam, Nicholas Michael Teausant (who goes by his Islamic name, Ased Abdur-Raheem) somehow got the idea that he is supposed to obey Allah's command in Qur'an 9:29 to "fight those who do not believe in Allah" (instead of completely ignoring the verse, as most Westernized Muslims do).

Like so many other converts to Islam who appear in the news due to terrorism charges, Teausant came from a Christian family. One day on Facebook, Teausant quoted a verse of the Qur'an that supports women's rights (the right of women to get brutally beaten by their husbands): 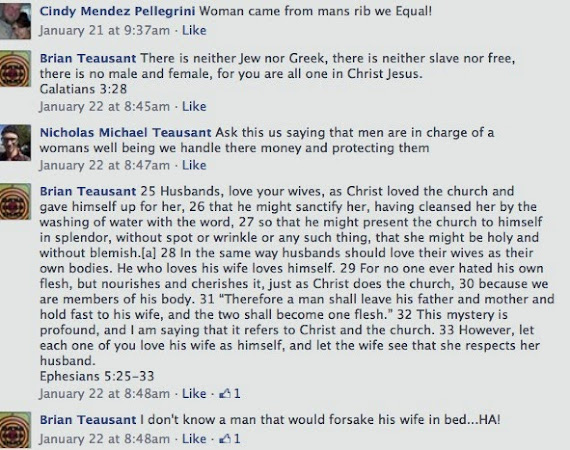 Brian also responded when he saw that his son had posted a disturbing image: 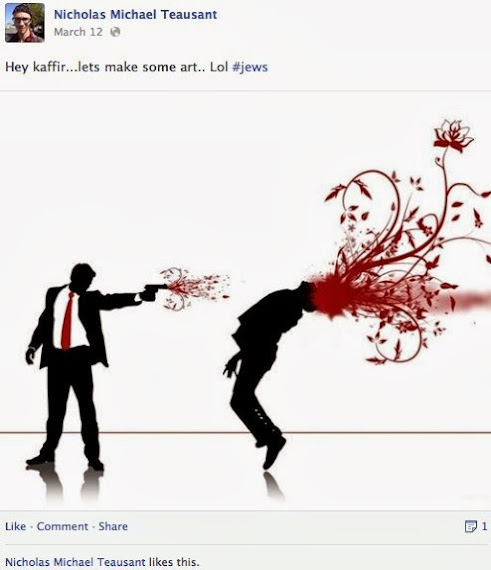 Teausant is a Muslim, however, so he wasn't persuaded by the Bible or by his father. Instead, he was planning to become the new face of terrorism in the Middle East.

Amazingly, Teausant is a member of the U.S. Army National Guard (though he hasn't been able to pass some required tests). One can only wonder why he wasn't kicked out long ago, especially when he posts comments defending terrorists: 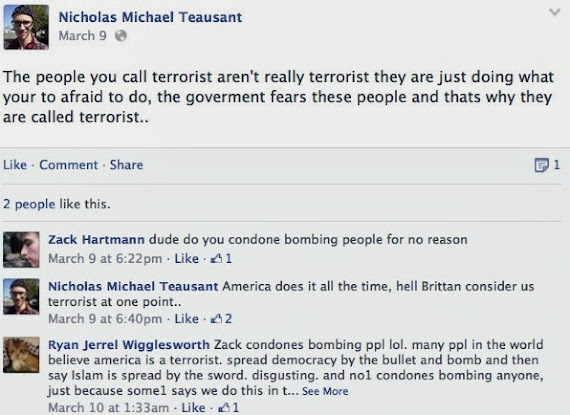 (This is reminiscent of Major Nidal Malik Hasan, whose obvious jihadist sympathies weren't seriously questioned by his superiors, who were too worried about being labeled "racists" or "Islamophobes" to press him on his views.)

Meanwhile, Muslim organizations, politicians, and the media continue to assure us that Islam is a religion of peace and tolerance, that it's no different from other religions, and that anyone who dares quote what the Qur'an actually commands about jihad must be a hate-filled bigot. We can only wonder how many Muslim converts will have to turn to terrorism before we're allowed to start wondering whether there's something different about Islam.

Reuters—A California man who prosecutors say was on his way to Syria to join an al-Qaeda splinter group was arrested on Monday near the U.S.-Canada border in Washington state on a terrorism charge, federal officials said.

The U.S. Department of Justice said in a statement that 20-year-old Nicholas Teausant, an American-born convert to Islam, had planned to cross into Canada and travel on to Syria to join Islamist militants.

"My designs have me staying there [in Syria] and being on every news station in the world," the criminal complaint quoted Teausant as telling an FBI informant last month.

"I'm going to be a commander and I'm going to be on the front of every single newspaper in the country," he said. "Like I want my face on FBI's top 12 most wanted. Because that means I'm doing something right."

The complaint said Teausant planned to join the group to engage in jihad, or Islamic holy struggle, and to fight the Western-backed Free Syrian Army, which is battling the government of President Bashar al-Assad in that country's civil war.

ISIL, a small but powerful force that emerged from the Sunni Islamist insurgency in neighboring Iraq and has attracted many foreign militants to its ranks, opposes the Assad government but has also fought rival rebel factions.

Teausant also spoke of wanting to target the subway system in Los Angeles on New Year's Eve or New Year's Day, according to the U.S. complaint, but discontinued his involvement over fears authorities had caught wind of it.

Teausant was arrested near the border in Blaine, Washington, on a charge of attempting to provide material support to a foreign terrorist organization. A student at San Joaquin Delta Community College in Stockton, California, he was also a member of the U.S. Army National Guard, enlisting in 2012. (Continue Reading.)


To learn the truth about jihad, watch this:

As my grandfather says..." the end is near "

It only took him ONE YEAR to turn from a patriotic solider in the US army to an American hating terrorist Muslim.

He was invited to the mosque LAST YEAR by a Muslima and didn't know anything about Islam. He loved music, Disneyland, taking photos and family.

...of course after being exposed the CULT OF HATE, Islam, he turned from a normal guy into a hate filled terrorist.

MORE PROOF ISLAM IS A CULT OF HATE AND EVIL.

How many converts to Islam does that make that have turned to monsters who want to kill? Too many to count.

Can a good Muslim be a good American?

That question was forwarded to a person that worked in Saudi Arabia for 20 years.

The following is his forwarded reply:

Theologically - no. Because his allegiance is to Allah, the moon God of Arabia.

Religiously - no. Because no other religion is accepted by his Allah except Islam (Quran, 2:256)

Scripturally - no. Because his allegiance is to the five pillars of Islam and the Quran (Koran).

Geographically - no. Because his allegiance is to Mecca, to which he turns in prayer five times a day.

Socially - no. Because his allegiance to Islam forbids him to make friends with Christians or Jews. (Quran 5:51)

Politically - no. Because he must submit to the mullah (spiritual leaders), who teach annihilation of Israel and Destruction of America, the great Satan.

Domestically - no. Because he is instructed to marry four women and beat and scourge his wife when she disobeys him (Quran 4:34).

Intellectually - no. Because he cannot accept the American Constitution since it is based on Biblical principles and he believes the Bible to be corrupt.

Philosophically - no. Because Islam, Muhammad, and the Quran do not allow freedom of religion and expression. Democracy and Islam cannot co-exist. Every Muslim government is either dictatorial or autocratic.

Spiritually - no. Because when we declare "one nation under God," the Christian's God is loving and kind, while Allah is NEVER referred to as heavenly father, nor is he ever called love in The Quran's 99 excellent names.

Therefore after much study and deliberation....perhaps we should be very suspicious of ALL MUSLIMS in this country. They obviously cannot be both "good" Muslims and good Americans. Call it what you wish....it's still the truth.

You had better believe it.

In throwing away Christian values and Christ in favour of Islamic ideals, these converts have traded a gold bar for a turd.

Yet indeed I also count all things loss for the excellence of the knowledge of Christ Jesus my lord, for whom I have suffered the loss of all things, and count them as dung, that I may gain Christ. Philippians 3:8

Remind me not to go into business with them.

Greetings! Our service https://expertpaperwriter.com/slader-review/ is considered one of the best establishments on the market offering quality services to clients. We have earned the reputation because our effort is directed to ensuring you achieve your academic goals with ease.