Even as we're being bombarded by claims that Islam is a religion of peace and tolerance, Al Qaeda is calling on Muslims to bombard us with something else. The latest issue of Al Qaeda's magazine Inspire includes step-by-step instructions on how to make car bombs, and even prioritizes targets for willing jihadists. 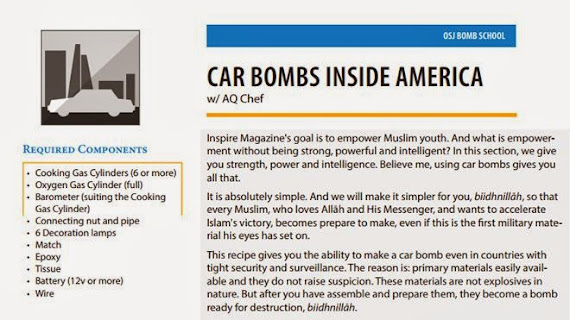 Of course, since we all know that no Muslim would ever take the Qur'an's clear commands to violently subjugate unbelievers seriously, we can ignore all this and go back to sleep. 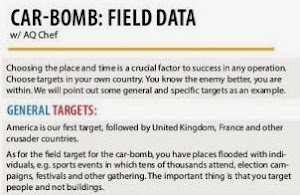 Fox News—Al Qaeda is calling on terrorist affiliates to detonate car bombs in major U.S. cities, including New York, Washington, D.C., and Los Angeles, in the latest edition of its Inspire magazine.

The issue comes nearly a year after the Boston Marathon bombing, and as the city readies new security measures for this year's race, being held next month. Inspire is the same magazine that included instructions for how to make pressure cooker bombs, which were used in last year's Boston attack.

The magazine’s Spring 2014 issue urges jihadists to target heavily populated events such as political rallies and sporting events, both in the United States and abroad -- including in Great Britain, France and other “crusading” countries.

“Choosing the place and time is a crucial factor to success in any operation,” the magazine reads. “Choose targets in your own country. You know the enemy better, you are within … The important thing is that you target people and not buildings.”


To learn the truth about jihad, click here.
Posted by David Wood at 8:29 PM

A blogger commentator by the name of Valentine Mee referred us to the website www.religionofpeace.com. I want to thank this person for introducing such an interesting site. On this page http://www.thereligionofpeace.com/Pages/History.htm, this is what was written: "Muhammad is a narcissist, a pedophile, a mass murderer,
a terrorist, a misogynist, a lecher, a cult leader, a madman
a rapist, a torturer, an assassin and a looter."
Former Muslim Ali Sina offered $50,000 to anyone
who could prove otherwise based on Islamic texts.
The reward has gone unclaimed."

I wonder if the reward is still unclaimed. I might be wrong, but I think it still is.