Shabir Ally Deliberately Deceives Muslims about Muhammad in the Bible 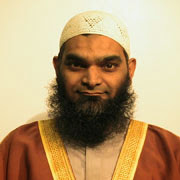 Shabir Ally is a Muslim speaker and debater. Several years ago, I took him to see The Passion of the Christ while he was in town for a debate with Mike Licona.

For years, I've thought that Shabir Ally was two steps above most other Muslim apologists, since he's highly educated and is familiar with many works by New Testament scholars.

Boy was I wrong, as this video shows. There's simply no way Shabir could have read the verses he uses in this video without realizing that he is deceiving his Muslim viewers. Apparently, Shabir is convinced that his fans are so incredibly stupid and lazy, they will not bother to examine the passages. I hope he's as wrong about his viewers as he is about the claims he makes.

Email ThisBlogThis!Share to TwitterShare to FacebookShare to Pinterest
Labels: Muhammad in the Bible?, Shabir Ally

I wouldn't hold out hope since I have heard his viewers just parrot what ever he says.

Is Ali of Pakistani, Bengali or Indian descent?

His last name is Arabic. According to Islam Muslims are not supposed to change their last names. Somewhere down the line either he or one of his ancestors changed their last name into an Arabic name.

According to Islam if you change your last name angels with books of good deeds won't be able to locate your name, which is under their father's ORIGINAL name. Someone broke that lineage in Ali's case.

Everybody wait for me ... I will release my Sahih book

to explain Quran and Hadith" since He gave himself that right!

Here is one to start

of them will be in fire except one group ...

Yes, this group that apostatized from Islam (followed Jesus)

May I know when was this video actually recorded?

I have no respect for any Muslim dawahist / apologist - for they are all liars no matter how educated they are. And this video only proves it! A question for any honest Muslim out there: if Islam is true why do your top dawahists have to resort to lies and deception to prove Islam? And isn't that very shameful?

I have watched many debates with Shabir. He is good and smart, but I would like to know why he is always the last one to speak (which represents a clear advantage) Can someone explain that?

Scientifically there is only one birth. Can you produce scientific proof of the second birth of man? (Spiritual awakening is not the same as birth.)