Muhammad, Zaynab, and the End of Adoption in Islam


Muhammad had an adopted son named Zayd, who was called "Zayd bin Muhammad" ("Zayd, son of Muhammad"). One day, Muhammad went to visit him and was greeted by Zayd's wife, Zaynab, who was extremely attractive, and who was wearing very little clothing at the time. Here's what happened according to al-Tabari:

She jumped up in haste and excited the admiration of the Messenger of God, so that he turned away murmuring something that could scarcely be understood. However, he did say overtly: "Glory be to God the Almighty! Glory be to God, who causes hearts to turn!" (The History of al-Tabari, Volume VIII, p. 2)


When Zayd found out that Muhammad was attracted to his wife, he decided to divorce her. Muhammad, of course, was worried about what people might think, so he told Zayd to keep his wife for himself. However, Zaynab learned that Muhammad was attracted to her, and she began despising her husband. Zayd, wanting to give his adopted father whatever he desired, divorced his wife.

Muhammad was still worried about what people might think if he married Zaynab, but then he began receiving revelations to justify the marriage. He received Surah 33:37, which reads:

Behold! Thou didst say to one who had received the grace of Allah and thy favour: "Retain thou (in wedlock) thy wife, and fear Allah." But thou didst hide in thy heart that which Allah was about to make manifest: thou didst fear the people, but it is more fitting that thou shouldst fear Allah. Then when Zayd had dissolved (his marriage) with her, with the necessary (formality), We joined her in marriage to thee: in order that (in future) there may be no difficulty to the Believers in (the matter of) marriage with the wives of their adopted sons, when the latter have dissolved with the necessary (formality) (their marriage) with them. And Allah's command must be fulfilled. 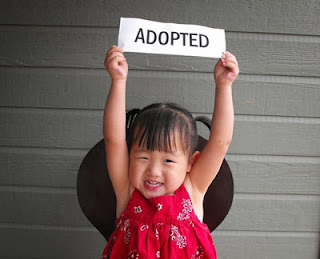 Notice the underlined portion, which says that the reason Allah wanted Muhammad to marry Zaynab was so that future generations of Muslims would know that it's okay for Muslims to marry the divorced wives of their adopted sons. Here we may start to wonder, "Is this a problem men struggle with? Is this problem so significant among men, that Allah needed not only to put this verse into his eternal Word, but also to have his prophet marry the divorced wife of his own adopted son?" Inquiring minds want to know.

Allah has not made for any man two hearts in his (one) body: nor has He made your wives whom ye divorce by Zihar your mothers: nor has He made your adopted sons your sons. Such is (only) your (manner of) speech by your mouths. But Allah tells (you) the Truth, and He shows the (right) Way. Call them by (the names of) their fathers: that is juster in the sight of Allah. But if ye know not their father's (names, call them) your Brothers in faith, or your Mawlas. But there is no blame on you if ye make a mistake therein: (what counts is) the intention of your hearts: and Allah is Oft-Forgiving, Most Merciful.


From that point on, Zayd was no longer called Muhammad's son, and Muhammad and Zaynab lived happily ever after (at least, until Muhammad died an agonizing death after being poisoned by a Jewish woman whose family had been slaughtered by invading Muslims).

But think carefully about what just happened. Allah desperately needed men to understand that it's okay to marry the divorced wives of their adopted sons, so he ordered Muhammad to marry Zaynab. But then Allah outlawed adoption, which means that men will never have adopted sons, and therefore will never worry about whether they should marry the divorced wives of their adopted sons. It seems that Allah sent Muhammad on a wild goose chase (and ended, for Muslims, one of man's noblest and most humane traditions).

For more on the Zaynab scandal, see these articles:

And it is the Only Living God who powerfully exemplifies the worth of Adoption.

God adopts us - through Christ Jesus. By His Blood, we have a new bloodline. In His Name, we have a new Name. And so [living out the image of God in us] we also claim others for the family of God - and even claim some unwanted people for our own legally defined families.

How very unsurprising it is that Islam would devalue one of the greatest gifts ever to be manifested in human societies. How very telling - that also in this way - Islam differentiates itself from human civilization.

A person can know that they'll never make a good Muslim if they have a heart of love that claims the last, the lost and the least for the Family of God.

Jesus said something like "Adopt ye, one another - even as I have adopted you..." Well, maybe that's not exactly what He said but I believe it's part of what He meant. He showed us how, when He started by "adopting" 12... and through them, many more.

The anti-adoption mind-set of Islam is just further evidence that Jesus COULD NOT have been a Muslim - and that Islam is not a humane society. Maybe we can never out-breed the Muslims - and maybe we don't even need to try: Islam is already withering. Why? Because nowhere within the heart of Islam is the Spirit that both claims the unwanted and also offers Life.

Yet again, I am / we all are profoundly indebted to "Answering Muslims" and to Sam & Dave for the love that you bring to your teaching. May the Only Living God in Jesus Christ continue to use you as a blessing to many as He ransoms the lost.

It's so sick you couldn't make it up. I suppose this epoch of human history is the first time ordinary people (i.e. non religious leaders/warlords) have had access to the texts of Islam and can see it for the pile of poop it is. I'm sure, even in the 10th century anyone, one other than the sycophant's, would have seen through this crock of shale had they access to and could read the texts. Based on these Surahs; Mo = false prophet, Allah = false god - these facts are undeniable, irrefutable and unquestionable.

So let me get this straight. Allah wanted to outlaw adoption but instead of just saying: "I now declare adoption illegal" Allah went thru a convoluted drama involving mohamed's libido and zaid's wife??? Yeah, that makes sense.

Julius Caesar adopted Octavian.
He never wanted to marry Octavian's wife.
In Islam, ties of blood and obligation are all subordinate to the pursuit of male power and the Jihad.
There is no ideology of the home.
Strange, there was such an ideology in Ancient Rome, the supposed sink of iniquity.

So better accept this fact,,,....good for you

An ad populum argument will hardly solve this dilemma.

The only poop around here is you guys. Someone should wash your mouths out with soap! How disgusting this site is at causing corruption in the world. Shame on all of you.

thanks for the post were very helpful.have a great start and better future...
Hotstar App

Good day! I simply would like to give you a huge thumbs up for your great information you have here on this post. I am returning to your website for more soon.
Tech PC

I think Aisha said it best, even though I do not remember where, "Mohammad, I think is strange that whenever you want to indulge in fleshly desire, Allah gives a ayah to say indulge."
How much of the Quran came from a spiritual being and how much came from Mohammad?

Learned a lot of new things in this post. Thanks for taking the time to share this blog..
cloud computing skills
scope of automation
google digital marketing certification
technical skills required for cloud computing

Hey friend, it is very well written article, thank you for the valuable and useful information you provide in this post. Keep up the good work! FYI, please check these depression, stress and anxiety related articles.
How to Build a Portfolio with ETFs, My vision for India in 2047 postcard, Essay on Unsung Heroes of Freedom Struggle

Hi, Thanks for sharing your blog. Please review mine. profile creation sites | social bookmarking sites Thanks

I prefer merely excellent resources - you will see these people in: hanumanchalisalyrics