Syria: Muslims Give Men 25 Lashes Each for Missing Friday Prayers

And the Obama Administration is backing the rebels. These floggings are ultimately funded, at least in part, by your tax dollars. 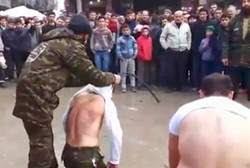 Haleb, Syria (Israel National News)—Syria is undergoing an accelerated process of Islamization, which is led by extremist Islamist rebel groups that follow sharia courts, and who operate a morality police force that enforces law and order Islam-style.

In Haleb, two men were convicted of failing to take part in the Friday prayers, and were sentenced to 25 lashes each, to be delivered publicly.

The two convicted men were brought to the city square, where they were flogged on their bare backs. The crowd that had gathered watched the scene quietly. (Continue Reading.)


The Muslim group Ahrar al-Sham (which carried out the punishment) posted video footage of the flogging, which can be seen here.
Posted by David Wood at 5:25 PM

I have to say I am disappointed in the quality of the lashes these men were given. The guy administering allahs punishment didn't seem to have his heart into it. There was no wind up, he didn't through his back into it.

I have seen Muslims flog woman with more passion and force then what was delivered to these men.

I don't think allah is pleased.

This video should serve as a warning to all who are thinking of converting to islam. This is just the tip of the icebag. What a barbaric religion! Mohammed's(allah's) police/warriors are waiting for you.

Radical Moderator show us where in Quran or Hadeeth it says to lash 25 times those who miss Friday Congragational prayer?