Slavery Alive and Well in Qatar and Saudi Arabia

Foreign workers head to Qatar and Saudi Arabia based on promises of fair pay and steady jobs. When they arrive, their contracts are torn up before their eyes, their passports are seized (so that they cannot flee), and they are beaten, starved, and worked to death (literally).

Muslims in the West assure us that Islam can rescue America and Europe from immorality. Reality, however, tells us that Islam is a massive obstacle to moral advancement. 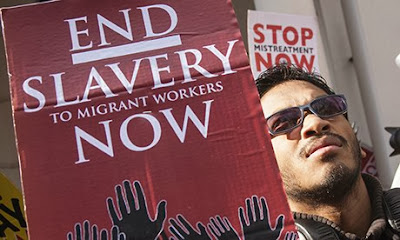 TORONTO (The New York Times)—A certain irony registered on the calendars of Persian Gulf residents on Dec. 18: That Wednesday was both Qatar’s National Day and International Migrants Day — a notable coincidence considering the fact that 90 percent of Qatar’s population is made up of migrant workers.

As the host of the first FIFA World Cup to be held in the Middle East, Qatar will be bringing the tournament to a soccer-obsessed region. Indeed, Qatar’s leaders have promoted their bid to host the World Cup as a chance to bridge cultural divides, a friendly meeting of civilizations on the soccer pitch. In the words of Hassan al-Thawadi, chief executive of Qatar’s bid, “Qatar 2022 can be a watershed moment.”

Qatar will be spending an estimated $100 billion on infrastructure projects and $20 billion on new roads, and will be constructing nine stadiums and 55,000 hotel rooms. Beyond the grand ambitions, though, lies a darker side to Qatar’s World Cup bid: the institutionalized exploitation of workers from South Asia. The facilities under construction are, in many cases, being built by workers who are virtual slaves. Of Qatar’s two million inhabitants, only 225,000 are nationals; the rest are migrant workers, mostly from Bangladesh, India, Nepal and Pakistan, brought in to do manual labor.

There have been widespread reports that thousands of workers are being abused and hundreds have quietly perished. The International Trade Union Confederation has estimated that, without urgent action to remedy conditions, 4,000 migrant workers will have died before a single ball is kicked in Doha.

An investigation by The Guardian recently revealed shocking levels of mistreatment of Nepalese construction workers by their Qatari employers. In addition to denying workers water and wages, some companies have taken their ID cards and prevented them from fleeing. Forty-four Nepalese workers died this summer, their deaths suspiciously attributed to “heart failure.” About 80 workers at one of Qatar’s most prestigious development projects have not been paid in 18 months, and they are starving. The dormitories in which South Asian laborers are housed are squalid and unhygienic, often packed with a dozen workers per room.

The abuse is not limited to Qatar; migrant workers face similarly horrid conditions in Saudi Arabia. Last month, a video surfaced that appeared to show a worker being violently mistreated by a Saudi man. Saudi human rights groups decried the brutish behavior, and the authorities promised to investigate, but nothing has happened. Unfortunately, none of this is an aberration for the gulf region, where attitudes toward brown-skinned laborers are overwhelmingly discriminatory, and workers have no legal protection. (Continue Reading.)