But if you say there's a problem, you're a racist, Islamophobic, hate-mongering bigot. 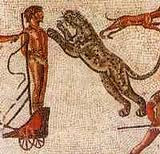 WASHINGTON – Nine out of the ten countries ranked the most oppressive for Christians to live in were due to Islamic extremism, according to Open Doors' annual World Watch List, which was released Wednesday.

With the exception of North Korea – ranked No. 1 for the 12th year in a row – every other country on the top 10 list had as its source of persecution, Islamic extremism. North Korea's persecution of Christians was due to communist oppression and dictatorial paranoia, explained Open Doors in its 2014 World Watch List. According to the report, the countries with the most extreme persecution besides North Korea are: Somalia, Syria, Iraq, Afghanistan, Saudi Arabia, Maldives, Pakistan, Iran, and Yemen, respectively.

Open Doors announced the rankings for its 2014 World Watch List, which documented the 50 nations least tolerant of their Christian population, at the National Press Club in Washington, D.C. The Christian persecution watchdog group's methodology involved measuring the level of Christian freedom found in five spheres of life: private, family, community, national, and church. A sixth sphere regarding degree of violence also factors in to the rankings. (Continue Reading.)


To understand why Muslim countries are so oppressive, click here.
Posted by David Wood at 11:56 AM

David have you tried going on Paltalk to debate muslims ? I go all the time and it is astounding the level of ignorance amongst muslims.

Most of the arguments that I have with muslims on Paltalk are the ones I have learned from you and Sam and it is very sad to see muslims being intellectually dishonest as they repeat bogus arguments that have no merit.

Even when you quote the quran to them they still want to argue and try to give you a context that is not there. It is very sad indeed because that is what cults do.

After engaging muslims on paltalk and seeing their absolute denial of the Islamic injunction to kill unbelievers even when the clear verses in the quran are quoted to them, I have come to the conclusion that Islam is not a religion at all, Islam is a CULT pure and simple. Not just any cult but a death cult at that. And why intelligent, highly educated, rational muslims do not see the barbaric nature of Islam is mind boggling indeed.

Thanks for sharing this nice blog. And thanks for the information.