Russian Bus Bomber Pavel Pechyonkin: "I Have Come Here Only to Make Allah Pleased with Me"

Qur’an 9:123—O you who believe! fight those of the unbelievers who are near to you and let them find in you hardness; and know that Allah is with those who guard (against evil).


We know from Western politicians and the media that no Muslim takes these verses seriously. So Pechyonkin must have turned to violence for some other reason. I guess we'll never know why. 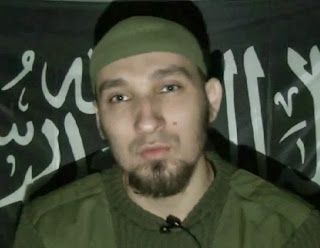 The Moscow Times—The Volgograd train station bomb that killed at least 17 people on Sunday was set off by a Russian man from the nearby region of Mary El who had converted to Islam and joined Dagestani militants, officials said.

The suspect, identified as Pavel Pechyonkin, worked as a paramedic with an ambulance service but left home in 2011 and joined Dagestani militants after converting to Islam and changing his name to Ansar Ar-rusi.

In response to his parents' video appeals for him to come home, Pechyonkin posted his own video online this spring, saying he was following God's will and would not turn back.

"I have come here only to make Allah pleased with me, to earn heaven," he said in the video.

In a plea by his parents recorded in March, his father, Nikolai, admonished his son to "drop those weapons" before he would become a "terrorist."

"Do all Muslims go around with weapons?" the father said in the video. "You are the only one so stubborn. What harm have people done you? […] You are going to kill children."

His mother, Fanaziya, said that she was also a Muslim, and pleaded with her son that he should abstain from using violence.

"What kind of the Koran…" she said, apparently too pained to finish the sentence, before finding the strength to continue: "I don't believe that Allah has ever said that one must kill people." (Continue Reading.)


Pechyonkin's mother doesn't believe that Allah has commanded Muslims to kill. Apparently, she hasn't read the Qur'an, which defines Muslims as those who "slay and are slain":

Upon reading this article, I was pulled by the statements of Pechyonkin's mother - What kind of the Koran…I don't believe that Allah has ever said that one must kill people." reminds me of the Pope's statement recently that "Quran never teach to kill people..." You can search that news on the news websites around the globe.

I just need to hear your opinion on this. & don't get me wrong. Not any of my intentions, ever, to stir any unnecessary feelings among us Christians churches. Just your decent opinion, please...

The Pope obviously doesn't know what he's talking about when it comes to Islam.

The Pope is not a "islamic scholar", amd while he maybe wrong about what the Qur'an says, He is also a Chief of State, and he can't go saying "islam is violence". Remember when, now Pope emerit Benedict XVI had this speech in Regensbürg? Mulims went crazy and in a killing spree. The Pope Francis is not saying that Islam is peace, he is making a plea to the muslims to treat non-mislims (specially Christians) with the same respect the muslis are treated in western countries. It could sound naive, but the Pope's job is to care of the baptized, not to attack muslims.

Hi Dave, thanks for the info that is given to enlighten the world about the dangers of Islam. I find it so hard to see any reason why anybody would want to become a muslim. A little bit of thinking and research should expose islam.
on the issue of the pope, I think he should not say islam is not a violent religion but rather it contains some peaceful abrogated verses.