After a recent series of terrorist attacks in Iraq, the U.S. Department of State labeled jihadists "enemies of Islam." Apparently, the U.S. Government is now an authority on who is, and who isn't, a true Muslim. Will the State Department go on to say that Muhammad was an "enemy of Islam," because he committed acts of terrorism? 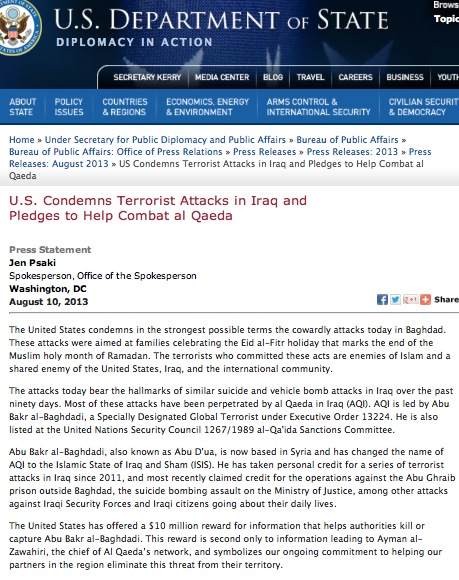 Surely the U.S. State Department would have to know better by now. They are obviously having a lend of us.

They are saying things like this because of the fact that they have gotten themselves politically tangled up with Islamic governments.

The State Department is engaged in Islamic propaganda (tagiyya). It is Mohammad's example in the Sunnah which interprets the Qur'an, not the State Department. Yet another example of the Obama Administration's treasonous behavior in assisting the global jihad.

A lie, in order to do its damage has to be believed.
I do not believe the State Department.
I ceased to respect their authority when they decided that the concerns of the OIC were more important than the preservation of the West.

This is the stupidist post on this blog, Muhamad (may peace be upon him) is not against Islam.