U.S. Pulls Diplomats from Lahore Due to Terror Threat

I'm confused. Wasn't President Obama supposed to make peace with the Muslims who hate America? Doesn't it seem like things are getting worse, rather than better? 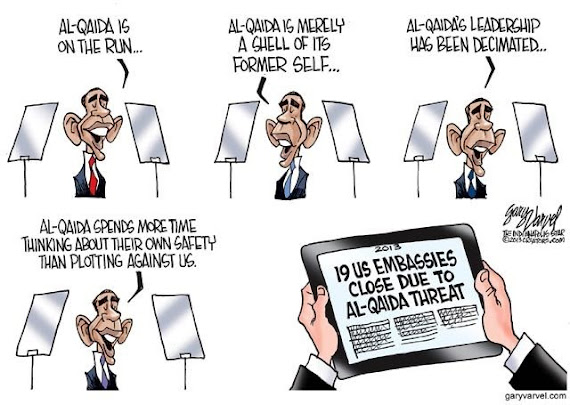 Washington (CNN) -- The State Department has evacuated most of its diplomats from Lahore, Pakistan in response to a terrorist threat against the U.S. consulate, senior State Department and other senior U.S. officials told CNN.

"We have picked up what we regard as a threat worthy of taking this action," one senior U.S. official told CNN.

The State Department issued an "ordered departure" for all of its diplomats in Lahore Thursday, except for a handful of emergency personnel. The diplomats were moved to Islamabad, the nation's capital, officials said.

A travel warning issued by the State Department said the department "ordered this drawdown due to specific threats concerning the U.S. Consulate in Lahore" and warned U.S. citizens against travel to Pakistan.

"The presence of several foreign and indigenous terrorist groups poses a potential danger to U.S. citizens throughout Pakistan," the travel warning said.

It was unclear whether the latest threat to the consulate was related to a current threat against U.S. facilities and personnel that prompted the United States to close diplomatic posts throughout the Middle East, Asia and Africa. (Continue Reading.)

I don't know whether to hope they shredded everything before leaving or not. I would not be surprised if Obama was either covering up more Benghazi-type criminal behavior or providing the Muslim Brotherhood with intel.

Those girls should have ended their trip to United Arab Emirates to get raped at the end of Ramadan, and that way we should increase our help to those countries and release Nidal because he has no lawyer ...
It all make sense now ...

I believe he said that al-Qaeda was decimated ... in other words, it's 90% intact.