I try to post updates on violence in the Muslim world, in order to refute the common claim that Islam can somehow rescue the West from immorality. But I just can't seem to keep up with all of the carnage. 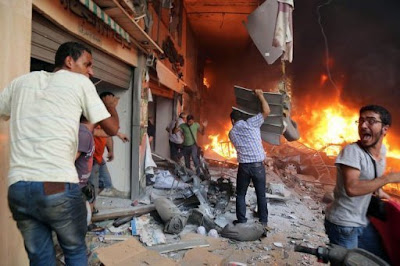 Video shown on Hezbollah's Al-Manar TV showed fierce flames engulfing several cars in the Beirut suburb. Thick, black smoke rose from the vehicles; a nearby building also appeared to be on fire. Ambulances were rushing to the scene, NNA reported.

"Army units arrived immediately at the scene, enforcing a security zone within the area of explosion while military experts initiated investigations under the concerned judiciary's surveillance," the army said.

After the blast, a YouTube video surfaced in which three masked men holding weapons claimed they are part of a group responsible for the attack. They stood before a large Arabic sign containing the Islamic creed, "There is no God but Allah, and Mohammed is the messenger of Allah."

The group, which calls itself "The brigade of Aisha, Mother of Believers," accused Hezbollah of being aggressors. Aisha is the last wife of the Prophet Muhammad and is especially revered by Sunni Muslims. (Continue Reading.)


Aisha was the "last wife of the Prophet Muhammad"? Who does the fact checking for CNN?
Posted by David Wood at 3:59 PM

Cameraman is taking photos. Shouldn't he not be helping tp turn fires out? If I was there that's what I would do. I WILL REBLOG THIS STORY ON MY SITE.

This scholar says Aisha is the last wife (I know he is wrong, the other guy in the video says at least one more wrong thing):