In many ways, Muammar Gaddafi was the ideal follower of Muhammad. Both had a thorough contempt for women, yet have been praised for their progressive views of women. Both used their status to satisfy their perverse desires, while claiming to honor God. Both were brutal dictators who would not hesitate to crush opposition. And both were killed when people got fed up with their oppressive ways (Gaddafi during a revolution, Muhammad by a Jewish woman whose family had been slaughtered by Muslims).

The new book Gaddafi’s Harem: The Story of a Young Woman and the Abuses of Power in Libya by Annick Cojean discusses the depths of Gaddafi's depravity. 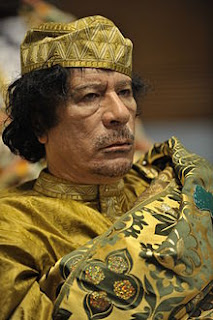 New York Post—To many Libyans, Khadafy was a feminist, his famed “Amazonian Guard” proof of the respect he held for women, trusting them with his own security. No other Mideast leader would think of such a thing. He was the author of “The Green Book,” in which he advocated for women’s equality. He took great pride in scolding the West on their shortcomings in this area.

“Moammar Khadafy is the one who opened opportunities for us to advance,” one female member of his vice squad told The Associated Press in 2011. “That’s why we cling to him; that’s why we love him. He gave us complete freedom as a woman to enter the police force, work as engineers, pilots, judges, lawyers. Anything.”

In truth, the Amazonian Guard was a front: Most of those women, too, were Khadafy’s sex slaves. He shopped for victims at weddings, schools and summits. He kept a secret apartment at the University of Tripoli campus, where he abducted and raped students. He reveled in seducing the wives and girlfriends of heads of state, ambassadors, various dignitaries. He gobbled Viagra and had to have sex at least four times a day, with four different people. It is fair to say the entire Libyan populace existed to sate his depraved sexual appetites.

Then there were the willing — those elite foreigners who succumbed. Whether by force or free will is a mystery.

“It always surprised me to see the visiting women head towards his room,” Soraya said, “immaculately dressed, designer purse in hand, and then come out with their lipstick smudged and their hair undone.”

Soraya was most shocked, however, to see a jaunty Tony Blair exit Khadafy’s tent, clueless as to the atrocities under his nose. “Hi, girls!” he exclaimed.

Those “girls,” like most everyone in the dictator’s orbit — man or woman, young or old, adviser, general, son-in-law — were his personal slaves. (Continue Reading.)

I'm glad this guy is no longer at the post. I even wrote a friendship essay here https://buyessays.info/blog/how-to-write-a-winning-essay to unite the nation.