But since authorities believe the attack was launched by jihadists, perhaps we should just keep quiet about it (in order to avoid being called "racists" and "bigots"). 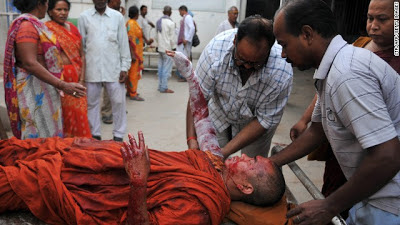 New Delhi (CNN) -- A series of small bombs went off in and around a world-famous Buddhist temple in eastern India Sunday, injuring two people, authorities said.

Four of the eight explosions occurred at the Mahabodhi temple complex, a UNESCO World Heritage site in Bihar state that houses a tree where Buddha is believed to have attained enlightenment.

The temple itself was not damaged.

A 50-year-old Tibetan and a 30-year-old Myanmar national were injured in the attack, Bhardwaj said.

While no one took responsibility for the attack, suspicion fell on the home-grown Islamist group Indian Mujahideen, Bhardwaj said.

The group, designated as a foreign terrorist organization by the U.S. State Department, is blamed for dozens of deadly bomb explosions throughout India since 2005. (Source)

please tell me what you think of this, is it true!! http://www.youtube.com/watch?feature=player_embedded&v=r3hrVtbamUU

Here is another instance of Muslim mob in Egypt molesting a woman in public:

It is rather shocking to hear this from the victim herself: "I do not want to live in a country where men think it’s OK to do this to a woman. I don’t know any girl who has not suffered from verbal or physically sexual assaults."

May be you could post this on the blog and ask Osama why you see such disgusting and shameless behaviour of men in Muslim countries again and again - even in full public view and why do these Muslim men have such a low view of woman and see them as nothing more than a sexual object that they can abuse at will.

potting shed
the God of Israel had shown the prophets of old the destructive nature of islam and its effect on the world.
Daniel 2:32-33 This image’s head was of fine gold, its chest and arms of silver, its belly and thighs of bronze, its legs of iron, its feet partly of iron and partly of clay.
Head of Gold=Babylon Empire. chest AND arms of silver= Medo Persian Empire. belly AND thighs= Greco Roman Empire. Legs of Iron= Sunni Ottoman Empire. Feet of Clay= the 10 countries that try to revive the Ottoman Empire made up of Sunni and Shia governments and hence
Daniel 2:43 As you saw iron mixed with ceramic clay, they will mingle with the seed of men; but they will not adhere to one another, just as iron does not mix with clay.
the prophet Daniel was intrigued by the last beast that arose out of the Great Sea in which the antichrist shall arise Daniel 7.19-25. However from my understanding of reading scripture the antichrist will not be a Mahdi like figure, but will actually claim to be Jesus.
Rev 13:11. Then I saw another beast coming up out of the earth, and he had two horns LIKE A LAMB and spoke like a dragon. Also Matthew 24.23-26, 2 thess. 2.1-11. also most insightfully the early church taught this. The Didache is, in all probability, the oldest surviving extant piece of non-canonical literature. some NT scholars believe The Didache was written as a direct result of the first Apostolic Council, c.50 C.E. (Acts 15:28). here is a verse from the didache;
For in the last days, the false prophets and the corruptors will be multiplied, and the sheep will be turned into wolves, and love will be turned into hate. For when the lawlessness increases, they will hate one another, and they will persecute and deliver up, and then the deceiver of creation will appear as GOD'S SON, and he will do signs and wonders. And the land will be given up into his hands. And he will do lawless things which have never been done from the age.
Satan has set islam up to usher in the return of ISA ibn Miryam to abolish the jizya tax as no other religion will be accepted at this time except for Islam. Rev 13.

Well what do y'all expect??
Its RAMADAN silly!!!
Its the time Allah desires more human Blood,
Its the Time Allah will receive more human Blood.
Why y'all acting like y'all don't already know??