We all heard about the "anti-Muslim backlash" following the massacre of Lee Rigby. While there were definitely some attacks (which we rightly condemn), the numbers were significantly exaggerated by the government-funded watchdog organization "Tell Mama." If "Tell Mama" is going to count offensive internet comments as anti-Muslim attacks, then I should point out that I am the victim of dozens of anti-Christian attacks every day. Why isn't "Tell Mama" addressing these anti-Christian "attacks"? Is it because only "attacks" against Muslims matter? 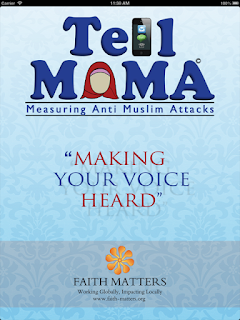 The Telegraph—Fiyaz Mughal runs a project called Tell Mama, which receives £214,000 a year from the Government to monitor anti-Muslim attacks in Britain. In the wake of Drummer Lee Rigby’s murder, he has been understandably busy.

There has, said Mr Mughal, been “a wave of attacks, harassment, and hate-filled speech against Muslims … an unprecedented number of incidents”, including “a rise in street harassment of Muslims – unprovoked, opportunistic attacks from strangers as Muslims go about their lives”.

He added: “Over the past week or so, these sorts of hate crimes have noticeably increased in number and, in many instances, become more extreme.

"The scale of the backlash is astounding … there has been a massive spike in anti-Muslim prejudice. A sense of endemic fear has gripped Muslim communities.”

The media, especially the BBC, have accepted the claims without question. A presenter on Radio 4’s influential Today programme stated that attacks on Muslims were now “on a very serious scale”.

Talk of a “massive anti-Muslim backlash” has become routine. And it is that figure issued by Tell Mama – of, to date, 212 “anti-Muslim incidents” since the Woolwich murder – which has formed the basis of nearly all this reporting.

Mr Mughal is in no doubt what lies behind it all. As he told a newspaper: “I do not see an end to this cycle of violence. There is an underlying Islamophobia in our society and the horrendous events in Woolwich have brought this to the fore.”

And as he put it on Today, “the [Government’s] Prevent [anti-extremism] agenda, the extremist agenda, have not been good for building confidence – the sense of fear just alienates and isolates communities.”

Yet the unending “cycle of violence” against Muslims, the unprecedented “wave of attacks” against them from strangers in the street, the “underlying Islamophobia in our society” – all turn out to be yet more things we thought we knew about Woolwich that are not really supported by the evidence.

Tell Mama confirmed to The Sunday Telegraph that about 120 of its 212 “anti-Muslim incidents” – 57 per cent – took place only online. They were offensive postings on Twitter or Facebook, or comments on blogs: nasty and undesirable, certainly, but some way from violence or physical harm and often, indeed, legal. Not all the offending tweets and postings, it turns out, even originated in Britain.

Tell Mama has no written definition of what it classes as an anti-Muslim incident, but has in the past adopted a wide definition. Last November, the cross-bench Asian peer, Baroness Flather, told a newspaper it was “pointless for the Conservatives to chase Muslim votes.

They are all on benefits and all vote Labour”. Tell Mama added this admittedly crass and untrue remark to its database as an “anti-Muslim incident,” though it said it had deleted it following an explanation from Lady Flather. (Continue Reading.)

The Brits are awakening from their coma and they're angry. British non-Muslims are finally realizing that they are being treated like second class citizens in their own country.

Considering the utter depravity of this atrocity, the only thing astounding about the anti-Muslim backlash was its restraint.

Does this Muslim Mama! monitor Muslims attacking other Muslims like
Shiaa and Sunni and others ... It is a huge library on the net
It will be credited for them anyway ... self credit hatred

I would really like this Muslim Mama open a branch in Islamic countries
to monitor not the words against non-Muslims but how many heads rolled,
and cut into pieces!