Critics of Islam No Longer Allowed to Enter Great Britain

Islamic supremacists of the world . . . Rejoice! People who speak the truth about Islam are no longer allowed to enter the United Kingdom. Facts no longer matter. Evidence is irrelevant. Britain will exclude people solely for making true statements about the teachings of Muhammad and the Qur'an. If you say, "The Qur'an commands Muslims to 'fight those who do not believe in Allah,'" you will be banned from Great Britain, even though the quotation comes directly from the Qur'an (Surah 9:29). But if you quote the verse and believe that it's the word of Allah, you will be quite welcome in the country.

Robert Spencer (who has been officially banned from the UK) writes:

In a striking blow against freedom, the British government has banned us from entering the country. Muhammad al-Arifi, who has advocated Jew-hatred, wife-beating, and jihad violence, entered the U.K. recently with no difficulty. In not allowing us into the country solely because of our true and accurate statements about Islam, the British government is behaving like a de facto Islamic state. The nation that gave the world the Magna Carta is dead.


Here is the government letter informing Robert that he is a persona non grata: 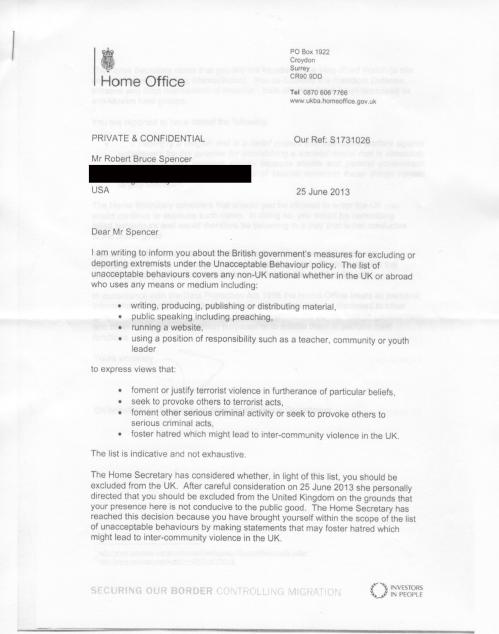 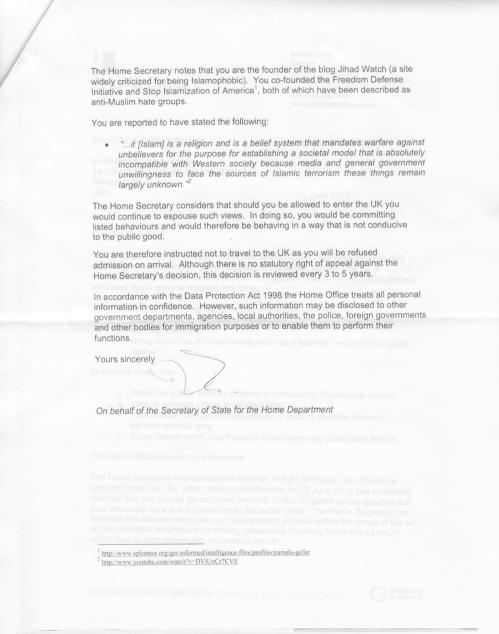 If GB applied that ruling consistently to all those who have showed contempt for the ideology of Islam, it would have a devastating impact on tourism. On the other hand, if the authorities were even remotely aware of the offensive dictates of the Quran, no foreign Imam would ever be allowed to enter GB. The application of their incitement ban is eerily selective.

Like Sam Shamoun was calling out during my Trinity debate with Edward Dalcour:

If GB applied this ruling to all who showed contempt for the ideology of Islam, it would have a devastating impact on tourism. On the other hand, if the enforcers of this "incitement" policy had even the slightest idea of the offensive and insulting language of the Quran, they would forbid entry of all foreign imams to GB. The application of this policy is eerily selective.

Stunning indeed. I hope somebody in the government regains their senses and reverses this foolish order. The very verses in the Quran that are being used by some moslems in Britain to commit atrocities in the UK cannot be quoted by an american to state the plain truth, unbelievable. Yes Winston Churchill was right, the british government continues to feed the crocodile hoping that it would eat it last. This is a stunning development indeed. Well Robert Spencer does not have to go to the UK to let the truth come out. Thank God for social media. Ordinary folks are waking up to the barbarity of Islam while governmet officials in the west and the powers that be are burying their head in the sand. God help us.

Because allah needs the decadent UK government to exclude people who quote the koran?

Perhaps you deny that the koran says these things?

I do not see any evidence that allah is "greater" or even "great" in this.

All I see is a pagan and polytheistic (aka pluralistic) government exercising selective and willfully blind PC-based discrimination.

Amazing, but its not like we have not seen this coming.

David what about you are u now banned as well?

So does that mean Acts17 can never return to the UK?

Ephesians 6:12
For we do not wrestle against flesh and blood, but against principalities, against powers, against the rulers of the darkness of this age, against spiritual hosts of wickedness in the heavenly places.

The British government is so full of trash and it has been infiltrated, I mean what is this!? We are not even allowed to quote the "peaceful" teachings of the religion of "God"!? Are you guys kidding me!? This guys want really Islam to rulle Great Britain...we can see from the last thing they have done to Robinson and I believe they send that guy to assassinate Rigby...

Theresa Mary May, Secretary of State for the Home Department, Great Britain: Ban the Qur'an in the UK

"Islamic supremacists of the world . . . Rejoice!"

That's just what Osama's doing. His mask slips once again, and he shows us his true nature, an Islamofacist who is not a "moderate", but approves of sharia law!

Will the Speaker's Corner in Hyde Park be shut down - or will opponents of Islam merely be dropped off in the middle of the ocean?

Will Pat Condell go into hiding or will Russia offer him asylum?

wow....what are UK elite up to? whats the big picture?....do they want civil war? When wrong becomes right and right becomes wrong on a public political scale then we know that social engineers are coaching a plan for civil war...what else could it be?....sorry Robert Spence for loss of your freedom in UK but keep up the good work in USA

Sooo....when is Anjem Choudary being deported for hate speech.

Brother David Wood, would you be able to link a petition that is being raised in support of Ms Geller and Mr Spencer to your Blog from Atlas Shrugs?

Sadly, democracy is out the door with this vile and disgusting religion. Britain has been dhimmified. When is the world gonna wake up to this disgusting cult...are there only a few people who sees this?

The West is done for. God has given her over to the Islamic forces to be devoured for her rejection of God and utter stupidity. The West puts her mouth in the lions jaws. It's only a matter of time before the lion clamps down - and the man of sin is revealed. May the Lord have mercy on those who seek him and remove themselves from this madness!

It looks like Great Britain and the rest of Europe will be the first to adopt the BLASPHEMY LAW that the OIC cherishes so much.

Spencer is a legend, he gives his life for freedom everyday because of scum like this, and this is how England repays him.

Welcome to the Living Hell! http://shutupnsing.wordpress.com/2013/06/28/the-rising-tide-of-insanity/