Omar Abdelbadie was born in Egypt, but has lived in the United States for the past eight years. He is currently studying Neurobiology at the University of Washington. In his free time, he volunteers with CAIR-Washington, promotes interfaith unity as Vice-President of Bridges (the University of Washington's Interfaith Council), and walks the streets looking for little girls to ply with drugs and take back to his apartment. The only silver lining to this dark cloud of perversion is Abdelbadie's unnamed friend, who called police after realizing that a sex-crime had just been committed. (If this friend happens to be Muslim, I tip my hat to him, for living a far better life than some of his Muslim brothers across the Atlantic have been living.)

Of course, perverts can come from all sorts of backgrounds. The point here, however, is that Muslim preachers keep telling us that Islam is the solution to Western immorality. With so many recent cases of Muslim pedophiles targeting little (non-Muslim) girls, I'd say that Muslim preachers have lost the right to tell us what Islam can do for the West. When a religion glorifies a man who had sex with a nine-year-old girl, allows its adherents to rape female captives, and calls anyone who rejects the religion "the worst of creatures" (Qur'an 98:6), it will never benefit societies with large populations of unbelievers. 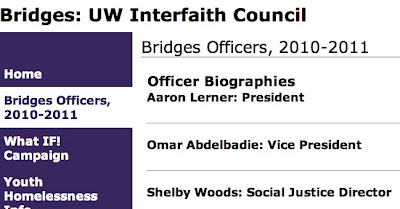 Washington—A University of Washington student accused of having sex with a 12-year-old girl he picked up in the University District has been charged with child rape.

Currently free after posting bond, UW Senior Omar Abdelbadie is alleged to have plied the girl with marijuana, brought her back to his apartment and had sex with her hours after they met. Abdelbadie, a 22-year-old originally from Bellevue, was described by prosecutors as a threat to community safety, despite his lack of a criminal history.

“The defendant is a danger to children given the circumstances of this crime where he met a 12 year old girl on the street, exposed her to marijuana, and took her to his home, where they had sexual intercourse,” Senior Deputy Prosecutor Carol Spoor said in court papers.

Having left home that evening, the girl ended up in the U District just after midnight on June 10, according to charging papers. She told police she was about to head home – she described the crowd there as “creepy” – when she encountered Abdelbadie.

According to the girl’s account, Abdelbadie approached and struck up a conversation with her, and then asked her to smoke marijuana with him. The girl said she told him her age several times before he brought her back to his apartment, where he had sex with her after claiming she had “seduced” him.

The girl left Abdelbadie’s home the following day. Abdelbadie and a friend are alleged to have walked her home, and watched hiding behind a fence as she walked up to the house.

Abdelbadie’s friend – who met Abdelbadie when signing him up for a children’s charity -- then called 911 after arguing with Abdelbadie about his conduct with a young girl. Officers responded to the area and arrested Abdelbadie.

According to charging papers, Abdelbadie told police he met the girl walking near University Avenue and claimed she was dressed “provocatively.” He is alleged to have admitted he “hooked up” with the girl, but would not say whether he knew her true age. (Continue Reading.)

Okay, this is something different but worth it and somewhat in line with the current way muslims are going.

monitor americans but not mosques???

You Islamphobes don't get it. She seduced him, and besides he is half as old as Mohamed when Aisha at 9 seduced him.

Don't you know that Islam is the solution, if this was an Islamic country this never would of happened, since she would need 4 male witnesses to prove she was raped.

> According to charging papers, Abdelbadie told police he met the girl walking near University Avenue and claimed she was dressed “provocatively.” He is alleged to have admitted he “hooked up” with the girl, but would not say whether he knew her true age.

He is a true pedophile, no normal person will get attracted to a twelve year old girl no matter how adult she looks. As Islam allows pedophilia, this pedophile doesn't need to contain his lust toward small girls.

Lets put this in perspective people. Aisha was 9 years old, Muslims say that being female and 9 is like being 18. So really this 12 year old was 21 years old.

Mohamed was 56 and he had the maturity of a 12 year old. So in Islamic reality this 12 year old is actually older then the Muslim man. So there for she seduced him as the older woman.

Pederasty is one of those most disgusting aspects of Islam.

she seduced him? I am sure she did!
after all within Islamic txt we read how our boy MO did his adopted sons wife, his mothers sister, all the countless slave girls, and lets not forget those baby girls he said he would marry if he was alive when they got older.
can u imagine they perverted little baby girls tempting " the best man ever"
I can see how women have not changed in in all this time.
look at all the young girls in Sweden who tempted the young muslims men to "rape " them.
those poor muslims men being tempted.
its just not right that islam should be blamed for those bad girls.
I have solution send all of them back to the sands of Saudi Arabia or back to the rock from where they crawled out. let them go do each other, I understand they do a lot of that too!

ISLAM the religion of filth and depravity.

Little does he know, that "she seduced me" crap is not going to fly here. Being 12, she could not give consent. This is America, not Pakistan, not Iran, etc., etc.. In America, we punish perpetrator, not the victim

The reason why people misunderstood the case is simply it happened in USA. Just think of a MB country, it would be as normal as an adultery confess of the girl. If the girl or her family is intelligent enough, it would have not been surfaced out. That is the reason why we recommend (order) our mothers and sisters to cover their entire body. Otherwise, Masha allah! we'll not be responsible for any such activities (in Allah's court, we won't be punished).
Unnecessarily, you US is making some dawa preachers to work overtime. Why only you kafirs make such haram laws? I don't understand where did you get this? You shaitan...OK..OK.. Peace!!!
Come to a common term in this regards atleast we'll follow our role model in the matter that pleases us and the prophet(Allah).
.
.
I say, name your religion in any language/word that you wish. But please ensure that it is filtered through the rule "Do unto others what you wish to be done to you". If not upto the level of God's expectation atleast upto human. So all will live in peace.
.
I hope no muslim will show up to support this active muslim's act because, no one will wish this to happen to any of their family child. Islam doesn't even upto the human moral standard. How in this world you believe in the root (Muhammad) of these immoralities.
But, be ashamed of being one of them who reluctantly not accepting the fact that Islam is not the way.
.
As a matter of fact that Islam cannot be the way at all.
.
The only way is JESUS. If you say this is a very old Christian stuff, call it in the way you want. But, it has never changed since the beginning of this sinful world.
.
No one is capable of making their way upto eternal life.
.
But only one GodMan, showed how we can make it up and how he made it up for us.
.
Just believe in him, you will end up in a really different world than you are now.
Praise God who unconditionally loves all mankind.....

Rape is the heart and soul of Islam, a loveless religion, the worship of a demon.
Only in such profane worship could someone consider rape as right.

Makes you wonder how many times he's gotten away with it.