Just when you thought our leaders couldn't possibly get any dumber or more cowardly . . . 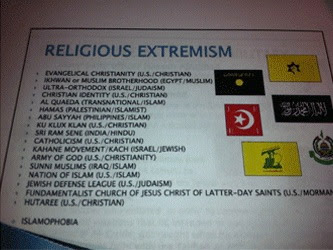 FoxNews--The U.S. Army listed Evangelical Christianity and Catholicism as examples of religious extremism along with Al Qaeda and Hamas during a briefing with an Army Reserve unit based in Pennsylvania, Fox News has learned.

“We find this offensive to have Evangelical Christians and the Catholic Church to be listed among known terrorist groups,” said Ron Crews, executive director of the Chaplain Alliance for Religious Liberty. “It is dishonorable for any U.S. military entity to allow this type of wrongheaded characterization.”

The military also listed “Islamophobia” as a form of religious extremism. (Source)

It's clear whoever put this list together is a complete moron, under sunni muslim (though correctly identified as a terrorist group) it states (Iraq/Islam) which is funny since Iraq is a majority Shia nation.

Evangelical Christianity, Catholicism, Mormonism, the KKK and Jewish Defence League? seriously? talk about political correctness gone totally haywire, at least islam was on the list, but yet even then it tries desperately to create this moral equivelancy between normal religions and the evils of islam..

Islam needs to be outlawed, not negotiated with and pandered to.

Aaron, you do need to make a distinction between Mormons and Fundamentalist Mormons (it is the latter, not the former that were listed). Sure, they're not terrorists, but are extreme: http://www.cbc.ca/news/canada/story/2012/11/04/bc-bountiful-school-closes.html

This is utterly deranged. There's not even any organization to the madness. I mean what class of objects are they even trying to discuss? They mix entire denominations, movements, and particular organizations like they are all one kind of thing.

I think if we pick at this obviously deficient mix of nonsense, we can see what is actually going on. The presenter pretty obviously had no trouble coming up with particular terrorist organizations and their ideological parents. al-Qaeda, pretty obvious. Nation of Islam, they're out there but yes. Oh, but we need to toe the multicultural line and present a facade that says that all ideologies are morally equivalent! So they went back in and mixed in Catholicism, Protestantism, Mormons, etc. It being a little difficult to find many religiously motivated terrorist organizations for those which are not actively engaging in much ... well just call out the whole denomination or religion.

It's similar to the Westboro Effect. You have one "church" composed of less than 40 members (mostly related) who go around the country committing reprehensible speech acts. Kill anyone? No. Maim anyone? No. Have they even resorted to physical violence before? No ... Do most Christians support them? No poll has shown anything close.

On the other hand, you have terrorist organizations with tens of thousands of members actively going around killing their own civilian coreligionists and Americans. What have the polls on their support among their ideological parent religions shown? Hundreds of millions of supporters and sympathizers.

Of course these two sides don't get anywhere near proportional coverage. If they just covered the violence, we wouldn't know who these Westboro people are; however, we would have more than a story a day on the global reign of terror being perpetrated in the name of Islam and their prophet Muhammad.

Who are the groups acting on violence?...mostly all islamic
.
it would be ok if Waco Texas group of David Koresh was listed but there all disbanded...
.
I dont see any christian group acting on violence in the whole world
.
It is absurd to put christian groups along side islamic....
.
Extremism is usually associated with act of violence in name of God and anyone knows that 99% of that today in committed by islamic groups...this is plain

Here is something you guys might find funny
http://m.dailytelegraph.com.au/news/non-muslims-not-welcome-at-mosque-funeral-for-former-policeman/story-e6freuy9-1226614026662

Depends what is meant by religious extremism.

Their are certainly common elements between Evangelical Christianity, Catholicism and Sunni Islam.

They need to entail which components make someone or some faith extremist.

Further more is extremism meant to be equated with terrorism? If that is the connection implied, then obviously this list is utterly absurd. Terrorism maybe the result of extremism, but does "extremist" evangelical Christianity and "extremist Sunni Islam" lead to the same kind of Terrorism?


In fact if we want to talk about "terrorism" or "sedition" and "illegal warfare", we might want to put Obama aiding and supplying the Muslim Brotherhood, illegally invading Libya, arming Syrian terrorist rebels with weapons at the top of the list.

Can i name Obama as extremist please now?

Derek Adams said, "In fact if we want to talk about "terrorism" or "sedition" and "illegal warfare", we might want to put Obama aiding and supplying the Muslim Brotherhood, illegally invading Libya, arming Syrian terrorist rebels with weapons at the top of the list."

Speaking of which, I watched a lovely video shot on a 'syrian rebel's' (i.e. as he's billed, he's probably more chechnican or turkish since those are the ones leading the way)cell phone of them taking a man, laying him facedown on the sidewalk with his head hanging of the edge of it and sawing the guy's head off.

It was a presentation of something Ted Shoebat was giving and he also made an excellent point. Thomas Jefferson was all for the French Revolution overthrowing the monarchy...until he went to france and saw the people cutting each other's heads off.

I really don't understand what the Church did to this guys, They are happy with Industries of tanks, bombs, liquor...and more other bad stuffs, are the same guys that used the church to slave Africa, they always to bad stuffs and point fingers to the church, please LORD come Soon...This are the ends of the world

This is hilarious...which make one wonder who made up this list for the U.S Military? Was it Obama's youngest daughter's wish-list to make the world a safer place? or was it a poll taken from some brainwashed junior high schoolers, who are now being taught how to pray like a Muslim and see how it 'feels' to wear a hijab, niqab and burqa.
BTW, Where on the list are the Shiite Muslims? Being one of the most extreme fruitcakes in the cult of Islam, they should at least be up there with the Evangelicals.
Watch this youtube video and see how shiites celebrate the brutal death of the prophet's grandsons, Hassan & Hussain. They even slit the fore heads of their children to get them into the 'swing' of things.
WARNING: GRAPHIC
http://www.youtube.com/watch?v=5OZeqrUkdnk

Wow! I can now see how the Catholics with their brutal'Body and Blood' Eucharistic sacrifice at the celebration of Mass, and the Evangalicals with their Ruthless 'wrist-cracking-bible-thumping' while preaching, are far worse than what we see in this video, which takes them way up on the list of extremists but the Shiite Muslims don't even make the 'cut' (pun intended !)lol

This is being taken entirely out of context and used for political purposes.

The page shown was used to start a dialog on how extremism can be found in all religions. Many other examples were given.

Whats worse is all of the "burn the witch" dialog is proving the point even more so. Bill Maher mentioned how Islam is the only religion who wants to kill someone that talks against it and yet here we are asking for the same of the presenter in a career or political way but for another religion.

The Crusades, Inquisition, Westboro, IRA and many other examples were cited in the discussion and not by the presenter but by participating soldiers who are not narrow minded.

Aaron McC mentioned "under Sunni muslim (though correctly identified as a terrorist group) it states (Iraq/Islam) which is funny since Iraq is a majority Shia nation." While Iraq is predominantly Shia, there are many Sunni there. It was being used as a point and a topic of discussion. No precedence or absoluteness inferred.