It's no secret that, in Islam, if a man is tempted by a woman, it's the woman's fault. Hence, women must cover themselves in order to prevent men from being tempted.

Apparently, babies are now responsible for tempting child molesters. In order to prevent instances of molestation, Muslim parents in Saudi Arabia should cover their babies in burkas.

But whatever you do, don't forget that the greatest threat to the world is Islamophobia. 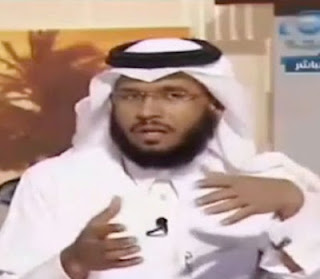 SAUDI ARABIA--A Saudi cleric has called for all female babies to be fully covered by wearing the face veil, commonly known as the burka, citing reports of little girls being sexually molested.

In a TV interview on the Islamic al-Majd TV, which seems to date back to mid-last year, Sheikh Abdullah Daoud, stressed that wearing the veil will protect baby girls. The Sheikh tried to back his assertion with claims of sexual molestation against babies in the kingdom, quoting unnamed medical and security sources.

Recently picked up on social media, Sheikh Dauod’s statement prompted wide condemnation from his fellow Saudis on Twitter. Some tweets called for the Sheikh to be held accountable because his ruling denigrates Islam and breaches individual privacy.

Sheikh Mohammad al-Jzlana, former judge at the Saudi Board of Grievances, told Al Arabiya that Dauod’s ruling was denigrating to Islam and Shariah and made Islam look bad.

Jzlana urged people to ignore unregulated fatwas and explained that there are special regulations set by the Saudi authorities to administer religious edicts and appoint those who are entitled to issue them.

He said that he feels sad whenever he sees a family walking around with a veiled baby, describing that as injustice to children. (Source)


Yeah, and I feel sad whenever I hear about a grown man having sex with a little girl. Non-Muslims describe that as "injustice to children." But when did Islam start caring about injustice to little girls?
Posted by David Wood at 12:41 PM

And still the useful idiots for the global jihad beat the drum that Islam is just like the Jewish Faith and Christianity! They strain out gnats and swallow camels!

It proves that Islam makes people becoming rapists, peophiles and sex maniacs. That is why women, including babies and grannies, must be protected from the muslims. Not the non muslims.

What about little boys??


(Musnad Ahmad, Hadith Number 16245, Volume Title: "The Sayings of the Syrians," Chapter Title: "Hadith of Mu'awiya Ibn Abu Sufyan": "I saw the prophet (PBUH) sucking on the tongue or the lips of Al-Hassan son of Ali, may the prayers of Allah be upon him. For no tongue or lips that the prophet sucked on will be tormented (by hell fire).

Self-righteously blaming others for what is actually dwelling in one's own corrupt heart is hypocrisy.

Any attempt to change into a 'better person' by following Mohammad's example is doomed to fail. There is no escaping one's own sin and corruption.

Only Christ has the power ...

...to change someone for the better.

Therefore, if anyone is in Christ, he is a new creation; old things have passed away; behold, all things have become new. 2Corinthians 5:17

"Therefore if the Son makes you free, you shall be free indeed." John 8:36

The source says, “He said that he feels sad whenever he sees a family walking around with a veiled baby, describing that as injustice to children.”

You cannot escape the evil of Islam. If you cover a baby girl with burkha, it is injustice to the children. If you keep them uncovered, then you can’t protect them from the moslem men from rapping them, even their fathers.

Wait! Wait! This just in! "Imam Abdullah-bhob, Shaykh Sheik-Shaykh yr-Bhoudi has issued a fatwa pertaining to ALL Muslim males that they must wear both a veil AND a burka over their eyes whenever they leave their homes."

This ruling has been made in the event that Muslim males might come into contact with a view of a female body (camels, donkeys and gerbils included) and risk lusting to the point of sin. Sheik-Shaykh yr-Bhoudi continued, "Until further notice, all Muslim men are required to completely cover their heads and eyes in honor of the dutiful blindness they experience because of being slaves to Allahu Ohyynkksmoor and to the Apusstle of Allah."

The Imam indicated that Muslim men must not look upon this evil world and must not use their eyes except to find their way within their own homes when no females are present. "In the presence of females, Muslim men must cover their eyes."
"Further", he added, "Muslim males who need to travel outside the home should be led by a seeing eye donkey, camel or monkey, because dogs are haram", said Imam yr-Bhoudi.

When asked how the Muslim men would know (without peeking) when they're in the presence of females the Imam said, "A good Muslim man can ask his camel if women are around because camels know - except for those that are Zionist spies leading Muslims into western decadence."

The Imam gave no indication regarding the ending of the requirements of the fatwa.