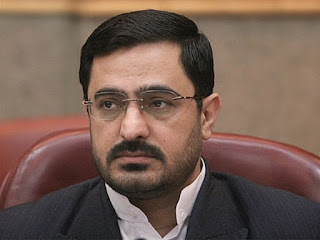 FOXNEWS--Many Iranians inside Iran and abroad are celebrating the timely announcement of Tehran’s former prosecutor, nicknamed “Butcher of Journalists,” Saeed Mortazavi’s arrest by Iranian judiciary today -- a man known for his cruel torture and mass murder of political prisoners and journalists.

According to a report by Fars News Agency, Iran’s state-run news platform, Mortazavi was taken into custody as he was leaving his office in Tehran and transferred to the notoriously brutal Evin Prison; ironically where he would send off many prisoners to be tortured.

No charges have been publicly announced, according to the report.

Many speculate his arrest signals further fracturing of regime and in particular Ahmadinejad’s camp, of which Mortazavi was a pivotal player. In recent days the infighting among members of the regime has been more hostile than ever.

Mortazavi played a significant role in the capture, torture and in many times murder of political dissidents and journalists, particularly after the 2009 Iranian post-election uprisings.

He was also implicated in the Kahrizak Prison incident when three inmates who were detained in connection with the June 2009 uprisings lost their lives in July 2009. Kahrizak came under the spotlight in the aftermath of the uprisings. The prison was notorious for the rape of both male and female inmates.

Directly following this incident, Mortazavi was further promoted by Ahmadinejad to head of the Social Security Organization, rather than losing his job.

Last week, Majlis speaker Ali Larijani announced that it was “unlawful” to retain Mortazavi as director of this organization, according to the Mehr News Agency. (Source)

Iran will deport him to Denmark where he already has a job with the Danish government lined up as an enforcer of "Hate Speech" judgements. The guy who went after Lars Hedegaard is getting a little overworked.

His trouble shall return upon his own head, and his violent dealing shall come down on his own crown. Psalm 7:14-16