Christians and Muslims have had plenty of discussion as to who is the prophet like Moses that Deuteronomy 18:18 speaks about. Sam Shamoun has recently made an excellent contribution to this matter by pointing out the structure of Deuteronomy 17-18 is dealing with the various leadership roles within Israel:

The idea of "brother" is mentioned throughout these chapters (17:15, 18, 2, 18) where the kings, priests and prophets are all to come from the brothers. Sam also shows how Jesus fulfils the role of prophet the same way he fulfils the role of king and priest. I think this observation is a profound contribution to the debate. I want to add what I think is a new idea though not as significant.

Recently I read the following book: 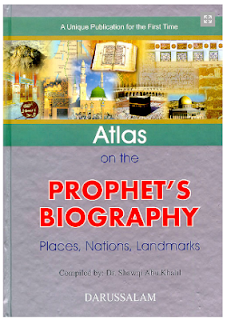 This is an excellent book and I recommend it to anyone who wants to get a feel for the regions where Muhammad lived and what he did. In the introduction though it has six pages which I found most interesting. These pages had twelve reasons why Muhammad is different to Moses.

There is a sentence that is repeated after most of the reasons that reads, "What a great different there is between the two (Muhammad and Moses)."

Here are the points:

11. The miracle of the Qur'an lasts forever but the miracles of the other prophets were only temporary.

This has made me come to the conclusion that when Muslim leaders say Muhammad is a prophet like Moses they do not really mean it. For them no one is like Muhammad. He is included in the shahada in a way that Moses is never included in the shema; he is addressed in the salaat as a patron saint and it is his intercession that is hoped for on Judgement Day. "What a great different there is between the two."

Is difference number 6 a valid one? Wasn't Jesus also sent for all mankind?

Do they admit they worship muhammad? "worship the creation not the creator" would be the new bumper sticker

Hi Rev Samuel Green
Is your recent debate with Zakir Hussain available on youtube yet?

Thank God for all the work you do for the kingdom of God.

Moses is a savior like figure to the Israelites as Jesus is the savior of the world (freeing us from the bondage of sin). Moses dies in the desert before reaching the promised land and is replaced by Joshua. Joshua's name means the same thing in Hebrew as Jesus' name (Yehweh saves OR Yehweh is Salvation). Coincidence?? This is foreshadowing the death and resurrection of Jesus. The resurrected Jesus is depicted as a warrior in the book of revelation as Joshua was a warrior prophet who won the promised land (Jesus wins heaven for mankind).

A very detail answer here, lets watch that too