Muslims often claim that the West needs Islam in order to rescue us from immorality. Yet Islam couldn't rescue this young boy from Saudi Air Force Sergeant Mazen Alotaibi. Indeed, the only reason Alotaibi will be brought to justice is that he committed his crime in a Western nation where victims aren't terrified to come forward. 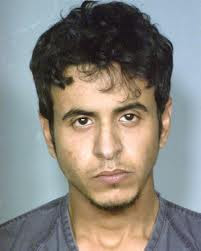 LAS VEGAS – A sergeant in Saudi Arabia's air force was jailed in Las Vegas on charges that he pulled a young boy into a hotel room and sexually assaulted him the morning of Sin City's big New Year's Eve fireworks extravaganza.

Mazen Alotaibi, 23, faces charges including kidnapping, sexual assault with a minor and felony coercion that could get him decades in state prison, according to police and charging documents obtained Friday.

The boy, who is younger than 14, told police the man forced him into a room at the Circus Circus hotel on the Las Vegas Strip and raped him. Police arrested Alotaibi after being called to the hotel before 9:30 a.m. on Dec. 31.

"There was a kidnapping and sexual assault with force," Las Vegas police Lt. Dan McGrath said. "The victim said he was forced into the room and sexually assaulted. We have a strong case based on the evidence." (Continue Reading.)

"The victim said he was forced into the room and sexually assaulted. We have a strong case based on the evidence."
...and Saudi government will toss a few million dollars at the government and the case gets dismissed.

Maybe they'll be nice and toss some funds at the boy's family but I doubt it.
The religion of ....ugh.

How can people allow this kind of behavior to happen in America? The parents of the teenage boy should be prosecuted for teaching their child to entice such a pious being.

We spend a lot of money and effort letting our Muslim children know that they are better than the infidel and that personal responsibility for their behavior is none of their concern!

How dare your society shatter the illusion that we've worked so hard to inculcate!

Tayeb Kamali, You are a backwards ass. Blame the victim? Go back under the rock you came from because you are a neanderthal with no business being in polite society.

Lisa King said, "Tayeb Kamali, You are a backwards ass. Blame the victim? Go back under the rock you came from because you are a neanderthal with no business being in polite society."

Lisa go back and read the post. He was being sarcastic.

This boy's behavior isn't Islamic, if he had followed the teachings of Islam, he wouldn't have done such a thing. I'm not ashamed that he is gay, but ashamed that he had sexually assaulted a child which is the worst crime a human bring could do in my opinion.

I respect your position against Islam, however, you should be fair with what you say about it.

My deepest sepathy to the poor child and his family.

Well that depends. If the person or persons who do something in the name of their religion and their can be a direct correlation between the action and the commands and doctrine of the religion and its Prophet, then it can be blamed on the religion or ideology.

If an ideology says to fight all people untill they accept your religion, and you go out and fight all people who are not members of your religion. Then there is a direct correlation between his actions and the doctrine. But I do agree that Islam does not order the rape of male children. Now female non Muslim captives is a completely different issue.

Some of the Companions of the Apostle of Allah (may peace be upon him) were reluctant to have intercourse with the female captives in the presence of their husbands who were unbelievers. So Allah, the Exalted, sent down the Qur’anic verse: (Sura 4:24) "And all married women (are forbidden) unto you save those (captives) whom your right hands possess." (Abu Dawud 2150, also Muslim 3433)


"We went out with Allah's Messenger (may peace be upon him) on the expedition to the Bi'l-Mustaliq and took captive some excellent Arab women; and we desired them, for we were suffering from the absence of our wives, (but at the same time) we also desired ransom for them. So we decided to have sexual intercourse with them but by observing 'azl (Withdrawing the male sexual organ before emission of semen to avoid-conception). But we said: We are doing an act whereas Allah's Messenger is amongst us; why not ask him? So we asked Allah's Messenger (may peace be upon him), and he said: It does not matter" (Sahih Muslim 3371)

@Search for Truth,
Do you have the citation from the Koran/Hadith about the young 'pearls' (boys) Allah promised muslims? That might be good for Almuhaysini, Fayez to see.

Doesn't this tell you all you need to know about arabs and islam?

This crime is not surprising in light of the teachings found in the Koran (treat the unbeliever with contempt in whatever manner when the opportunity presents itself) which only helps to cultivate the corruption already present in the human heart.

"The heart is deceitful above all things, and desperately wicked; who can know it?" Jeremiah 17:9

"For out of the heart proceed evil thoughts, murders, adulteries, fornications, thefts, false witness, blasphemies. These are the things which defile a man, but to eat with unwashed hands does not defile a man." Mathew 15:19, 20

A crime begins and is commited in the heart first...

"But I say to you that whoever looks at a woman to lust for her has already commited adultery with her in his heart." Mat 5:28

Whoever hates his brother is a murderer. 1John 3:15

...before being physically manifested.

The purpose of the preceding 2 verses is to expose the corrupt human condition (as do all of God's commands) and prove the need for grace, via the Redeemer, Christ.

Islam has no power to remove the corrupt nature that resides within man or to inwardly (where it counts) change man for the better.

All it can do is focus on outward works of the law and merely cover up what is underneath, resulting in the situation described by Jesus (God was manifested in the flesh 1Tim 3:16) where he put the religious hierachy (i.e. scribes, pharisees, popes, bishops, sheiks, imams, clerics etc.) on notice in Mathew 23.

"For you are like whitewashed tombs which indeed appear beautiful outwardly, but inside are full of dead men's bones and all uncleaness. Even so you also outwardly appear righteous to men, but inside you are full of hypocricy and lawlessness." Mathew 23:27, 28

From studying the teachings of the Koran it is easily determined that the god of the Koran, Satan, would rather have the human heart remain as corrupt as possible.

David, I'm a bit confused on this one. I heard that boy molestation is common in the Islamic world, and even celebrated in Pakistan, at least according to Eric Allen Bell. I can't figure out why they'd consider that though. Is there anything in the Qur'an on this? I see this happen from time to time, but I haven't done enough research to confirm or deny that there's a correlation.

Havn't you heard of bacha bazi? it's huge in afghanistan. They get young boys to dress up in womens clothing and sing for a bunch of old men who lust over him, and argue with each other who is going to take him for the night

Saudi girl, 15, barricades herself in bedroom after being married to 90-year-old groom for huge dowry

These comments are something else!

"Another Tweeted: ‘She is still considered as a product! A father sells his daughter without mercy, to be bought by money and status and power; all of it for the sake of fulfilling a desire.’"

But it's not un-Islamic.

"A member of the Saudi National Association for Human Rights (NSHR), Suhaila Zein el-Abedin urged authorities to ‘save this child from tragedy,’ adding that marriage in Islam must be based on mutual consent."

Did Aisha and co consent? Perhaps he wasn't taught this in school.

"She also blamed the girls parents for accepting the dowry and marrying off their daughter to a man 75 years older than her, underlining the importance of establishing a minimum age of 18 for marriage in Saudi Arabia."

'You abused the precious relationship between a parent and a child': Judge blasts mother as he jails her for life for beating son, 7, to death over Koran recitals

"A woman who beat her son to death for failing to learn parts of the Koran by heart and burned his body to destroy the evidence has been jailed for life today."

Wow! How devout! By burning his body isn't she also guilty of burning the parts of the Koran he did learn?

Yes Yahya,that was exactly what I was thinking of, bacha bazi. Why does it happen there though? I would imagine Muslims would want to kill men that make love to little boys due to the homosexuality thing, not celebrate it.

I think make love is the incorrect term to use. I know it was unintentional but I just had to mention it.

I suppose that could be taken as a bit affirmative of what they're doing, so I'll say having sex. The point is they're having sex with boys and I'm wondering why they aren't getting killed for homosexuality. It puzzles me.

What do all these men have in common?

He isn't necessarily gay. Rape is more about control, not so much about sexual desire. In the region of Afghanistan/Pakistan, which generally fails to recognize official governments or mainstream Islam, the people do not believe that sex is the same thing as homosexuality. Homosexuality is culturally defined as the romantic love of another, but sodomy is just an acceptable physical release. Those who are accused (no trial) of being suspected of having romantic love for another are cruelly stoned to death in most nations.