Muslim Tries to Educate Me about Peaceful Islam, Then Calls for the Execution of Critics!

Our lovely friend @LearningKoran on Twitter recently responded to our critique of the #MyJihad campaign by telling me to read the Qur'an in context. Here's a screen shot of part of our exchange a few days ago: 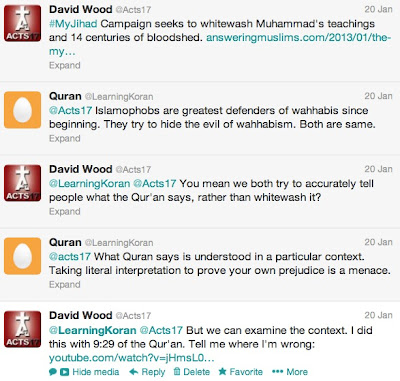 Imagine my "shock" when I read his latest Tweets, calling for the execution of critics of Islam.

So was he practicing Taqiyya when he tried to convince me that Islam is a religion of peace? (Ironically, in the video he condemned us for making, we explained the concept of Taqiyya!) Or did he take my advice, read the Qur'an's violent passages in context, and conclude that critics of Islam must be killed?

Within days of me sending him a video explaining Surah 9 of the Qur'an, he began referring to Surah 9 as proof that Allah doesn't allow criticism of Muhammad.

I just had to send him a message requesting clarification:

It really is amazing how much time allah spends defending mohammed! ha ha and I thought they saw all prophets equally. Islam really is exposing itself for the nasty ideology it is.

I am amazed on how muslims always refute themselves without realizing it lol...
This is spiritual blindness at its best. May the Lord open up their spiritual eyes to see and know the truth, in Jesus' Name. Amen.

Wow this guy is such a tool! Lmbo!!