And yet "The Simpsons" will continue to mock every ideology in the world except Islam. 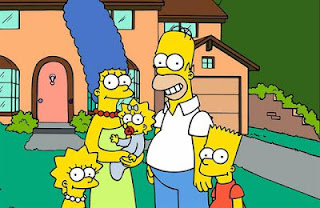 ISTANBUL: Turkey's broadcasting regulator is fining a television channel for insulting religious values after it aired an episode of "The Simpsons" which shows God taking orders from the devil.

Radio and television watchdog RTUK said it was fining private broadcaster CNBC-e 52,951 lira ($30,000) over the episode of the hit U.S. animated TV series, whose scenes include the devil asking God to make him a coffee.

"The board has decided to fine the channel over these matters," an RTUK spokeswoman said but declined further comment, saying full details would probably be announced next week.

CNBC-e said it would comment once the fine was officially announced.

Turkey is a secular republic but most of its 75 million people are Muslim. Religious conservatives and secular opponents vie for public influence and critics of the government say it is trying to impose Islamic values by stealth.

Elected a decade ago with the strongest majority seen in years, Prime Minister Tayyip Erdogan and his Islamist-rooted AK Party have overseen a period of unprecedented prosperity in Turkey. But concerns are growing about authoritarianism. (Continue Reading.)

To be fair: many European countries fine those who offend the religious feelings of others--and not just that of Muslims. Pew Forum recently released some information about blasphemy and religious insult laws around the world (http://www.pewforum.org/Government/Laws-Penalizing-Blasphemy%2c-Apostasy-and-Defamation-of-Religion-are-Widespread.aspx). Granted, most European countries have such laws to prevent "hate speech", and of course punishments are far less harsh than those in Islamic countries, but they still sometimes hinder freedom of expression. While it's good to condemn the treatment of blasphemers in Islamic countries, we shouldn't forget that (albeit lesser) opposition to freedom of expression exists elsewhere.

The latest news on the proposal to build a Mega Mosque has received a setback as Newham Council officers recommended that the Council reject an application to build the proposed Mega Mosque in West Ham.

However, the Muslims aren't about to go down without a fight and are planning to rally the troops in one last ditch attempt to fight against the decision.

At the 4:07min mark in the video link below Sheikh Haitham Al-Haddad requests Muslims come together today at the Council House to "show some civilized gathering or protests there.." Why does he need to point this out?

What's even stranger is at 4:23min mark Sheikh Haitham Al-Haddad said: "We should realize that if we lose that chance it would be easy for ourselves to lose other chances to have big massages in London."

Can someone please explain why Muslims feel a need to have "big massages in London?" I'd be ever so grateful.