Unless the Muslim Brotherhood decides to practice a little Taqiyya during the appeal, Egyptian atheist Albert Saber will be heading to prison for criticizing Islam. (In order to appear balanced, prosecutors even added that he made statements "critical of Christianity." Note: If possession of statements critical of Christianity is going to be a crime in Egypt, everyone who has a copy of the Qur'an is about to go to prison.)

The world cheered as the "Arab Spring" began toppling dictators in the Muslim world. But people like me were asking, "Don't you realize who's going to take over these countries when the dictators fall?" Of course, anyone who criticized the Arab Spring was immediately labeled a racist, Islamophobic, hate-mongering bigot. After all, Islam is a religion of peace and tolerance, and when Islam controls a land, you get an interfaith utopia, just like the mythical interfaith utopia of Cordoba. Now that the Muslim Brotherhood has taken the reigns in Egypt and has begun punishing people for blasphemy, however, Westerners are scratching their heads wondering what went wrong. It's Islam, Silly. 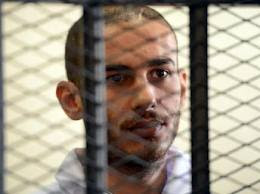 CAIRO — A Cairo court sentenced an atheist from a Christian family on Wednesday to three years in prison for insulting religion, firing up fears about the future of freedom of expression here just as Egyptians prepare to vote on an Islamist-backed draft constitution denounced by secular groups as failing to protect such rights.

The convicted man, Albert Saber, is expected to be released on bail of about $167 pending an appeal. An open and avowed atheist, Mr. Saber, 27, was initially accused of circulating links to an offensive online video lampooning the Prophet Muhammad that set off protests across the Muslim world in September. Mr. Saber has denied promoting the video, and he is being charged for other statements critical of Islam and Christianity that police investigators found on his computer. Open profession of atheism is almost unheard-of in Egypt and is widely considered an affront to society as a whole.

Although blasphemy was a criminal offense under former President Hosni Mubarak before Egypt’s revolution as well, Mr. Saber’s case has raised special alarm because it comes against the backdrop of the sometimes violent battle over Egypt’s draft constitution, which elevates the crime of insulting religion to the level of the charter itself.

“Expect to see many more blasphemy prosecutions in the future now that it’s embedded as a crime in the constitution,” said Heba Morayef, a researcher with Human Rights Watch who is tracking the case. (Continue Reading.)

The refusal of Egypt to allow this man his conscience is despicable, and even damnable.
We believe in the holiness of the soul itself, even when the soul is that of the skeptic.
I hope that fear does not become this man's path, for fear always leads to the pit.


Islam should be banned for insulting Humanity.

IBTimes UK: What is your intention behind the initiative?

Imran Firasat: My sole intention is to reveal the other side of reality of Muhammad´s character which I think is true. In my opinion Islam was created by Muhammad in order to gain his own objectives and now it is the time to come out of that illusion.

IBT: Are you sure these facts are irrefutable? Did any Islamic scholar help you?

Firasat: Why do we have the misconception that only Islamic scholars can teach us correct things about Islam? They are not born with the Islamic knowledge and they learn it in their practical life like any other Muslim.

It is important to mention that I have been a Muslim for 26 years and was part of the Islamic society and system for the same duration. That is why I do not need to confirm the facts with any scholar. All the facts are in the Koran, hadiths [interpretations of the Koran] and several historical books. I just present those same facts through a different point of view. Islamic scholars will never admit what is wrong about Islam. They always try to cover up the dubious character of Muhammad.

IBT: What made the Spanish authorities 'suddenly threaten' you? What could be the reason?

Firasat: That's a very funny, interesting and surprising question for me even. Why now? I was granted asylum because of my criticisms of Islam. I have formally asked the Spanish government for the prohibition of Koran in Spain. I have given thousands of interviews to radio and TV channels. I wrote articles in newspapers.

But I was never told by anyone that what I am doing is illegal. Now suddenly they try to revoke my refugee status, detain me and prosecute me for offending Muslims' religious sentiments. Why? There may be two reasons: Fear of violence by Muslims abroad and in Spain, and conflicts in diplomatic relations with Islamic countries which are investing in Spain.

“It’s the Devil’s book” cried Pastor Jones, “full of evil and of hate.”
“I tried it, and then declared its fate” said Pastor Jones
Deserted even by your flock, while the world watched in horror and in shock,
You walked straight and walked alone, Pastor Jones

They said you wouldn’t last, but you held true and you held fast, Pastor Jones
You defied their threats, their God, their hell and damnation,
The pleas of leaders and of kings and proceeded with the conflagration.
Generals trembled, the President shook, but you held your course and burnt that book, Pastor Jones

Pastor Jones, Pastor Jones, with muttonchops and funny look,
You are the butt of many a joke, decriers jibe and satirists poke,
Death threats abound, it’s said, Ayatollah’s demand your head,
But you walk humbly, without pride, with your pistol at your side, Pastor Jones

Pastor Jones, Pastor Jones, with muttonchops and funny look,
Whatever the merits of your act, your right to do it is a fact,
Which we must defend if we are to see, the flourishing of our liberty,
For, of all that we hold sacred, true and dear,
None is more sacred than to express, or speak without fear.

It wants to appear anything acceptable to the audience and never admit there is a problem.
It is like an emotional commitment to a creed only accepting positive statements and believing any critism is a lie.
Until I thought of the mirage anology it did not make sense. There is no real attempt at consistent logic, just an image.
Mo is happy to claim the Torah, Gospel are his, and are corrupt but never the details.
It is slander without the content.
Talks go on and on with no real point, just we are right and they are wrong.

I wonder if pointing out this approach of a Mirage is helpfull because it seems to explain a lot of their behaviour and lack of facing basic facts and realities about their faith.