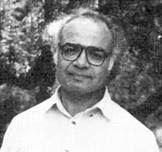 Rashad Khalifa claimed that two verses of the Qur'an are not authentic, that the Hadith are not authoritative, and that he was a messenger of Allah. He is also the main source of the silly argument that the Qur'an contains mathematical miracles based on the number 19.

In 1989, the Islamic Legal Council of Saudi Arabia issued a fatwa against Khalifa, declaring him to be a heretic. Less than a year later, he was was stabbed to death in his Tucson mosque. If you're thinking that he was killed by Islamophobes, think again.

ARIZONA--Soad Rayan Khalifa cried softly Tuesday afternoon as she recalled the long ago day she found her brother dead on the floor of the mosque where he studied and taught.

He was on his back with "many, many stab wounds" evident from his neck down. His fingers were slashed horribly.

She remembered grabbing his hand and finding it cold.

Tuesday was the first day in the trial of Glen Francis, who is charged with first-degree murder in the Jan. 31, 1990, death of Rashad Khalifa, 54.

During opening statements, Deputy Pima County Attorney Casey McGinley told jurors Khalifa's religious beliefs and teachings brought about his demise. He had received death threats from all over the world, in part because he believed two verses did not belong in the Quran.

"This is a case about many suspects, but the evidence only points to one killer," McGinley said.

In the months after Khalifa's death, McGinley said, many potential suspects were ruled out, but one remained intriguing because he disappeared the day of the slaying.

Benjamin Phillips had come to the mosque saying he wanted to learn more about Islam, but he sometimes seemed to know more than he let on, McGinley said. In addition, he sometimes spoke with a Jamaican accent and sometimes did not.

Phillips couldn't be located, however, and the case went cold.

That year the FBI in Dallas received a tip that a resident named J.Q. Wall might be Phillips, McGinley said.

Wall denied ever having been in Arizona, but he told agents he was aware of Khalifa's teachings and, as a Muslim, he "deserved what he got," McGinley said. (Continue Reading.)

He had to take out those 2 verses to make the "argument from the number 19" work. He uses the hadith in bukhari which says khuzaimi was the only one who knew those verses. Since they weren't mutawwatir, he takes them out.

Clever dude, too bad he claimed to be a false prophet.

The defense that a crime is sanctioned under Shariah law should NEVER be allowed in U.S. courts. That is the reason behind the American Law for American Courts legislation, and every state needs to demand their legislature pass it. (www.congress.org)

And so it goes - Sunni killing Shia, Shia killing Sunni and both killing everybody else. Such is the teaching of that great holy book the Qur'an. Everyone is an apostate or a blasphemer or something deserving of death - just read the book.

Bigots and Islamophobes: That's all you are when you point out Islam's supposed "flaws" and "evils." Oh, and you're racists too.

You just want to establish a theocracy!

At least, that's what I hear from the lefties.