According to a government census released today, the Muslim population in the United Kingdom has increased from 1.5 million in 2001 to 2.7 million in 2011. During the same time period, the number of Christians fell from 37.3 million to 33.2 million, and the number of people identifying themselves as non-religious rose from 7.7 million to 14.1 million. 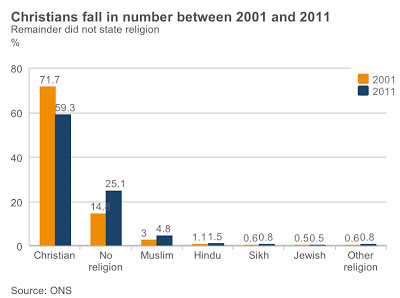 Here are the "Key Points" of the census:

Multiculturalism in istelf isn't bad, we just haven't experienced it in the UK. For example in the area where you have Muslims, Hindews, Jews and Buddhists - not to mention Christians - which believers do you think will get listened to when they want a new place of worship or oppose the latest bit of free speech on YouTube? That's not multiculturalism, it's colonialism, and the authorities continue to sleepwalk their way towards war.


The word Christian is almost meaningless without a context.

A better question is, are you a Disciple of Jesus?

Too many of those that claim to be Christian do not have a relationship with Jesus, if they all did Christianity would dominate.

A real converted, born again Christian would not leave the faith, but a false cultural Christian would.And this is what we are seeing now, the chaff being blown away.

Ryan S;
All words are meaningless without context. Christian is itself a definition; of Christ.
A better question is are you a messenger of Jesus? Jesus chose only 12 Disciple's, messenger's being those who choose to bear His cross and spread the Word.
Christianity was never meant to dominate, it was meant to save. The second coming of Christ is not to thank man for his great work in defeating Satan, but to rescue those left and defeat Satan Himself.
There is no such thing as a born again Christian. Christ was born once and resurrected once. There was no second birth. Born again is an esoteric term used by the mystery schools; the pheonix rising.
The chaff is not being blown away now. The fire has not even been lit yet. You are still seeing the weeds growing with the wheat.
I am not attacking you, just saying.

European Anti-Semitism and the Jewish State (something relevant)

World is going back to barbarity. Ridiculous...if muslims win against Israel, because of European hatred for Jews, Europens deserve to be annihilated from the face of Earth.

Quote:
The word Christian is almost meaningless without a context.
end

Correct indeed.
It's one thing to identify yourself as Christian, it's another to understand exactly what Christianity is, what it means, and where it stands in relation to other monotheisms.
What is the haecceity of Christianity?
What makes it what it is?
Do Christians worship the same God with Jews? With Muslims?
These are some of the questions I'd pose to the 71% of "Christians" in the UK.

"There is no such thing as a born again Christian. Christ was born once and resurrected once. There was no second birth. Born again is an esoteric term used by the mystery schools; the pheonix rising"

Id have to say thats a very strange responce ...what does the Bible say? lets read it

3 Now there was a Pharisee, a man named Nicodemus who was a member of the Jewish ruling council. 2 He came to Jesus at night and said, “Rabbi, we know that you are a teacher who has come from God. For no one could perform the signs you are doing if God were not with him.”

3 Jesus replied, “Very truly I tell you, no one can see the kingdom of God unless they are born again.”

4 “How can someone be born when they are old?” Nicodemus asked. “Surely they cannot enter a second time into their mother’s womb to be born!”

5 Jesus answered, “Very truly I tell you, no one can enter the kingdom of God unless they are born of water and the Spirit. 6 Flesh gives birth to flesh, but the Spirit gives birth to spirit. 7 You should not be surprised at my saying,You must be born again. 8 The wind blows wherever it pleases. You hear its sound, but you cannot tell where it comes from or where it is going. So it is with everyone born of the Spirit.”

9 “How can this be?” Nicodemus asked.

10 “You are Israel’s teacher,” said Jesus, “and do you not understand these things? 11 Very truly I tell you, we speak of what we know, and we testify to what we have seen, but still you people do not accept our testimony. 12 I have spoken to you of earthly things and you do not believe; how then will you believe if I speak of heavenly things? 13 No one has ever gone into heaven except the one who came from heaven—the Son of Man. 14 Just as Moses lifted up the snake in the wilderness, so the Son of Man must be lifted up, 15 that everyone who believes may have eternal life in him.”

16 For God so loved the world that he gave his one and only Son, that whoever believes in him shall not perish but have eternal life. 17 For God did not send his Son into the world to condemn the world, but to save the world through him. 18 Whoever believes in him is not condemned, but whoever does not believe stands condemned already because they have not believed in the name of God’s one and only Son. 19 This is the verdict: Light has come into the world, but people loved darkness instead of light because their deeds were evil. 20 Everyone who does evil hates the light, and will not come into the light for fear that their deeds will be exposed. 21 But whoever lives by the truth comes into the light, so that it may be seen plainly that what they have done has been done in the sight of God.

Heather,Jesus is very clear and uses the term "Born again" several times!. Unless someone is "born again" in the spirtual sense in Christ ie the old sinful nature crucified and a new nature given, they cannot be saved, this is very clear from the text.

Jesus warned that many will say to Him "LORD LORD" Mat 7:7 and he will say "I never knew you" to them and cast them from his presence forever.

I stand on this, many of those that claim to be Christians do not show the fruit of conversion and live still a wicked life because inwardly they have never been "Born Again"