We shouldn't let Pakistan's pursuit of Christian girls on trumped up blasphemy charges distract us from the real threat to world peace: Islamophobia. 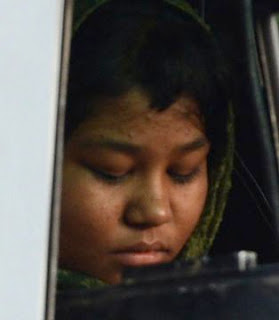 It's the latest twist in the case of Rimsha Masih, a Christian teenager who was charged more than a month ago under Pakistan's blasphemy laws for allegedly burning pages of Islam's holy book for cooking fuel. She has denied the charges.

The three witnesses initially told police they saw Khalid Jadoon Chishti, a Muslim cleric, tear pages out of a copy of the Quran and put them with police evidence that led to the charges against Rimsha.

But they recanted those statements on Monday at a bail hearing for the cleric, according to the imam's lawyer, Wajid Ali Gilani. A fourth witness stood by his initial statement. (Continue Reading.)

Hi David, I've been trying to find a post of yours back but was unable to locate it.
It was about the fact that Allah wanted you to sin and that he would 'replace' the 'non sinner' by another.I would greatly apreciate if you could provide a link to that post.

Here's a video on that issue:

I just feel sorry for this girl i am Pakistani and hate Sharia Laws.

Hi David
your show & website is the bestI I feel very sorry this girl I am Pakistani and hate Sharia Laws.

David
Can anyone throw light on whats happening to Hafiz Mohammed Khalid Chishti. Its December no news .
appears the laws of this country are very one sided. Injustice cannot be forgotten.