Muslim organizations in the West constantly assure us that there's no conflict between Islamic Law and Western values. But once again, we find Muslims calling for the global implementation of "blasphemy" laws, which are clearly at odds with Constitutional rights. So there's obviously a conflict. We're just supposed to ignore it in the name of tolerance. 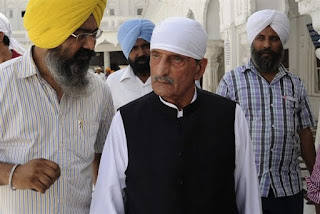 NBC News--A Pakistani government minister on Saturday announced a $100,000 bounty for the killing of the person who produced an online film that denigrates the Prophet Muhammad.

Federal Minister for Railways Ghulam Ahmed Bilour also asked the Taliban and al-Qaida to extend support to the would-be killer.

Speaking at a press conference at the Peshawar Press Club, the federal minister said whoever is responsible for blasphemy deserves death.

"The American who produced the sacrilegious film in the U.S. is also liable to death and we will shower dollars on the one who killed the blasphemer. If members of the banned militant organizations kill the maker of the blasphemous movie, they will also be rewarded," Bilour announced.

He called for legislation to have the anti-blasphemy law at the global level so that no one could hurt the religious emotions of the Muslims in the name of the freedom of expression.

He said the situation would remain tense until anti-blasphemy law was enacted at the world level. (Continue Reading.)

What if the American government put out a reciprocal reward for the death of the cleric or person who issued such a fatw on US citizens.

this is no different than a mafia contract.

This is a criminal organization hiding behind religion.

Nope. No reciprocal reward for a cleric's death but I WILL offer a reward of a dollar, three ninety-five for posting the vid that shows this "Official" cavorting (with his camels) in his wife's chartreuse undies while singing the Farsi version of "Tiptoe Through The Tulips". No, I'm not kidding.

Post that vid on YouTube or LiveLeakes and I promise to send the money to the address of choice designated by the poster. We'll let the Pakistani's decide how to deal with Mr. Bilour after that.

let USA aid Pakistan, Let Pakistan kill US nationals with that money..
Its very romantic game between Pakistan n USA ,,, for what ....?

I promise citizenship in europe to anyone and his family who shoots that crazy person.

If he did that in the US, under a government that upholds the US Constitution, maybe so. But Pakistan is a lawless place. And nobody here is going to do anything about it.

Wow, the so called religion of peace(pieces) has done it a again. All about killing and killing.

Have you ever noticed that not one muslim cleric or muslim for that matter, ever considered praying to their allah to forgive these people and lead them to repentance.

I guess in islam its a waste of time praying for "doomed" kafirs anyway. After all this is the allah who mislead millions of christians to believe in "conjecture". Check Surah 4:157 if you dont believe me.

If this was a film against christianity we wouldve prayed for those that persecute us. See matthew 5:44 if you dont believe me.

The question is "When will muslims see the truth, the real truth and not conjecture

In Christ, by Christ, for Christ

I am not sure why that the only picture media could find of the Minister is when he is visiting a Sikh Temple. Even after the Wisconsin massacre, media is not taking caution to not link Sikhs with Muslims. Maybe they just like showing Turbans when talking of Muslims. Just to clarify for all visiting that all the other men in picture are Sikhs(and not Muslims) and the Minister from Pakistan was making a political visit to India when this was taken.

Thanks for the clarification! I'm in agreement that the media have been irresponsible but I think the Western media (at least) are far more compromised by the mammon of mohammedans than we yet understand.