Notice that violent Muslims and peaceful Muslims tend to want the same thing: the implementation of Islamic Law. They only differ on the means of getting what they want. Violent Muslims believe that violence is the key to achieving their goals (and the groveling of our leaders over the past twelve days hasn't exactly proven them wrong). Peaceful Muslims, on the other hand, believe that Sharia can replace the Constitution without violence (though they often rely on the violence committed by other Muslims as their reason for wanting blasphemy laws in the U.S.). 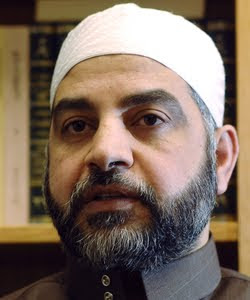 TheBlaze--There are religions that promote turning the other cheek even when mocked, but it appears Islam is not one of them. According to one of the most prominent imams in North America, Islam never condones violence, but it also, under no uncertain terms, “ever accepts” speaking ill of the Prophet Muhammad.

In fact, so grave is mockery of the prophet considered, that the cleric – Mohammad Qatanani, who leads one of the largest mosques in New Jersey – even believes free speech that criticizes Islam poses a national security threat to the U.S. and that those responsible should be investigated by the Department of Homeland Security.

“We, as Americans, have to put limits and borders [on] freedom of speech,” Qatanani, leader of the Islamic Center of Passaic County (ICPC), told TheBlaze. He explained that while Americans may ”have the freedom“ to speak their mind, ultimately, they “have no right to [talk about Muslim] holy issues“ as it will incite ”hatred or war among people.”

Qatanani said he thinks agitators who slander Islam, or, more specifically, the Prophet Muhammad, incite violence and hence, pose a national security risk that threatens the safety of Americans at home and abroad. Thus, America should disregard its First Amendment as it is typically applied and instead act in accordance with sharia law for the ultimate “good” of society. (Continue Reading.)

Since it is blaspheme to consider Jesus just a man and a prophet as Islam preaches...than shouldn't Islam be banned for blasphemy?

they shoulda got rid of this loon when they had the chance.

His eyes are completely dead. Same for most muslims which is quite sad. What an unhappy life.

“In heaven, Mary mother of Jesus, will be one of my wives.”

Surely this is blasphemy?

The host asked if Muhammad used any other foul language, to which the priest responded,

“Oh, boy, did he ever; unfortunately this program is way too short to list them all."

According to Qaid al-Qadir (v.1, p.381), Muhammad told Muslims to retort to uppity infidels by saying things like -- again, he didn't pronounce it, but the text appeared on the screen –

"Go bite on your mother’s clitoris!"

"Go bite on your dad’s penis!"

NOW WE CAN SEE WHY THEY ARE WORRIED!

Typical. Like Flip Wilson used to say, "The Devil made me do it." The best defense is a good offense Many Muslims are peaceful. the question is, what happens when Islam achieves a political majority? This man insults the Constitution of the US. Perhaps we should make that against the law. Mohammed is ot only a false prophet, he is not a prophet at all. Delusional perhaps.

Yeah, and guess what? Liberals are starting to buy it.
Does the US Overvalue Free Speech?