When Muslim tempers started flaring over the latest Muhammad film, here's how the reasoning of some Muslims apparently went:


Quite a bit of rust built up on those mental gears. 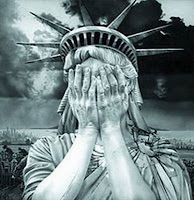 FRONTPAGEMAGAZINE--First of all I just want to give a big shout out to the savage sadists, who put a bounty on my head for insulting their precious little “prophet.” You’re going to be hearing a lot more from me in these days. So, get used to it, because my free speech and I are not going anywhere and you fascist fanatic freaks will be hunted down and prosecuted, Insha’Allah.

Now then, with all of the death threats directed at me and others, who are simply telling the truth about Islam, one has to wonder, what are the leaders in Islam trying to hide? It’s a belief system and we should be allowed to question it, criticize it, to question it and even mock it. In fact, come to think of it, we are allowed to do all of those things. This is America, land of the free and home of the brave – also home of the First Amendment, a freedom which keeps the rest of the free world free. And free is how we intend to remain, no matter what the cost.

But if America is a free country then why is a New Jersey Islamic cleric, Mohammad Qatanani, leader of the Islamic Center of Passaic County (ICPC) saying this? “Americans, have to put limits on freedom of speech,” and “Americans may have the freedom to speak their mind, ultimately, they have no right to talk about Muslim holy issues” and things of that nature. Has he forgotten where he is? Or is he in America to try to change things for the benefit of Islam? (Continue reading at FrontPage.)

yes muslims are there in one of my favorite countries America to change it and to make it dirty like afganistan, saudi arabia etc. And to conquer America and Europe. How many more times brother David brother Sam Robert Nabeel mam Wafa sultan have to shout to wake you spineless coward people up. why don't you people who support islam and muslims wake up? instead of covering muslims saying 'oh no muhammad was so cute and innocent that he didn't understand the difference between 6year old girl and 54 years of his age, and muslims are so sweet look at their beard style or it is their faith to kill and rape others let them practice their faith'open the quran and read. instead of blaming Christian preachers, read the quran. The words of Christian preachers are not their words but they are saying exactly what quran says. see history. see how muslims occupied the lands from Spain to India by sword. and they are trying to do the same. just kick islam out or see the rape of your wife, sister, daughter or grand daughter. decide which rape porn you want to see. decide where you want your children to live. don't wake up. go to sleep cowards. bye

i get death threat because of my you tube videos. watch them too. my most viewed video is - did neil armstrong convert to islam ? from there you will get links of other VERY IMPORTANT videos also.

The first amendment died in the long hot summer of the sieges of Chicago and Miami. Not to mention the Watts riots.

Hi, this article is coming tomorrow in a magazine, the title is "who is Muhammad anyway" and it has a pretty funny picture. The spanish gov has advised the spaniards in Egypt to be careful because the religion of peace might become violent as always.

I don't remeber if i put the link, but here it is just in case.

Islam has the same agenda as the Nazi had in the 1940' but this time, their goal is to dominate the world under Islam. In Africa and many other countries, muslims conquest to convert people by the sword, the Jihadists. In North America, because Muslims are a minorities, they act peaceful but when their population grows they start to try to change laws of other countries and start to persecute. Their biggest threat of Islam is their birth rate: A typical American family has between 1 & 2 babies compare to a Muslim family who's birth rate is 8X times higher than any north American families so in just two decades, a population of 2.6 millions of muslims in America will becomes a population of 41.6 millons in 20 years. At this time, prepare yourself for violence to come. In Europe, it's already happening. Wake up America!! I urge American to stand up for the truth and freedom! Peace and love is what we need. I'm not from America but I pray for your country.

It's interesting that Eric mentioned Christianity. Lord willing he will one day embrace it because if he doesnt he will end up spending eternity with none other than Muhammad. That would be funny sad.

speaking of freedom of speech
http://news.ninemsn.com.au/world/8539948/anti-islam-filmmaker-arrested-in-la

Much more about the Innocence of Islamfilmmaker here. The dude evidently isn't who he says he is.

Are you sure that EAB"s "bounty" isn't a joke?

Look at the bounty; it has fifteen zero's. That's one quadrillion rupees, which is 19 trillion dollars.