Parents Convicted of Killing Shafilea Ahmed . . . in the UK

Over 90 percent of honor killings in the world are carried out by Muslims. But who are we to judge other people's cultures? 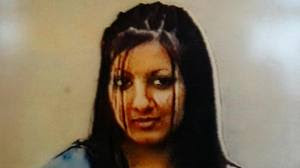 UNITED KINGDOM--The parents of Shafilea Ahmed have been jailed for life after being convicted of her murder.

The 17-year-old went missing from her home in Warrington, Cheshire, in 2003 and her body was found in the River Kent in Cumbria six months later.

Iftikhar, 52, and Farzana Ahmed, 49, had denied her murder but the jury at Chester Crown Court returned guilty verdicts against them both.

Mr Justice Roderick Evans said they would both serve a minimum of 25 years.

The judge told them: "Your concern about being shamed in your community was greater than the love of your child."

The couple suffocated Shafilea with a plastic bag after years of abuse.

After the trial. Det Supt Geraint Jones described the killing as a "vile and disgraceful act against someone they should have been very proud of".

He added: "For me this is not an 'honour killing', it's a clear case of murder." (Continue reading.)


Jones doesn't seem to understand that the term "honor killing" emphasizes the motive, which is to restore a family's reputation in the community after one member has damaged the reputation. But that's exactly what the motive was. So why is Jones denying that this was an honor killing?

On a different note, here's a video of Shafilea's parents conjuring up some crocodile tears as they deny their involvement in 2004:

Only in Islam. Such a waste of life.

I've always said that the next Einstien might be an arab woman, if she were given the chance of an education and was able to think freely, guess we'll never know because the males of islam have some rediculous idea that subjecting woman to violence, killing and raping them is what our God wants of them.

Please Muslim people throw away satans Unholy Koran pick up a bible and start to use some common sense.

This exposes the hypocrisy of shafilea's wicked father, a callous adulterer:

Honor killing is disgraceful. Every one who approves of the practice, and all who have done it, should know nothing but humiliation for the rest of their lives.