Muslim organizations like CAIR and ISNA keep telling us that Islam is a religion of peace. Wouldn't their time be better spent sharing their "peaceful" version of Islam with Muslims like Mohanad Shareef Hammadi? 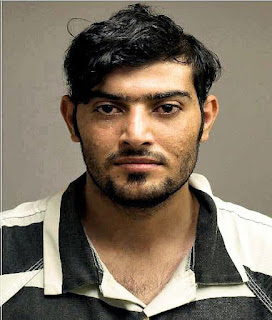 LOUISVILLE, Ky. (AP) - An Iraqi man pleaded guilty Tuesday to 10 charges of conspiring to send weapons, cash and explosives to al-Qaida in Iraq and two counts of lying to federal immigration agents to get into the United States and stay in the country.

Mohanad Shareef Hammadi, 24, gave simple "yes" and "I plead guilty" answers to questions from U.S. District Judge Thomas B. Russell in federal court in Louisville. The surprise plea came a week before Hammadi was set to stand trial on the charges in Bowling Green, Ky., where he and a co-defendant were arrested in May 2011 after a federal sting operation.

Hammadi, who did not have a plea agreement with prosecutors, faces 25 years to life in federal prison plus millions of dollars in fines when he's sentenced Dec. 5. He had been scheduled for trial Aug. 28 in Bowling Green. The co-defendant, 30-year-old Waad Ramadan Alwan, previously pleaded guilty and is scheduled for sentencing Oct. 3 in Bowling Green.

The plea came as good news to soldiers who fought near the city of Bayji, Iraq, in the Sunni Triangle north of Baghdad in 2005, where Hammadi and Alwan told the FBI they worked as insurgents. Six Pennsylvania National Guard soldiers died in that area in August 2005 and Hammadi and Alwan told the FBI and an informant that they were active insurgents there. (Continue Reading.)

Robert Spencer's commentary on the defense attorney's words is hilarious: "[Y]ou know how these things can just happen to someone. You can be just going about your business, walking the dog, buying groceries, and whammo! Suddenly you find yourself shipping weapons to al-Qaeda! I hate when that happens."

Anyway, a lot of people try to deflect attention from the radical Islamic threat by saying, "There are rarely Islamic terrorist attacks in the United States!" They forget about stuff like this -- monetary and material support for terrorist organizations like al-Qaida.

Hi,
I know this is off topic, but I thought you might want to check this out:

Prevention is better than cure. This USA knows very well about All Islamic organizations in north america. But they still kept their mouth close because of Oil vs Dollar relation. What These Islamic countries do with those dollars is just invest in Americas in various forms of Islamic organizations; for conversion mostly; n wait for the time.

I wonder how many sleeping cells are available in north america !, What these Islamic org do is just buy as many as lands near to Cities, towns, or villages n make it as training camps for future Jihad candidates. These advanced training camps are better trained than camps in Afghanistan or Pakistan. o they bring those advanced trainers to Afghanistan or Pakistan n train local terrorists. Even USA knows about all these matters, but its main priority is money instead of peace.

Muslims think that the rest of us are gonna burn and be tortured in Muhammad's sadistic version of hell.

I wonder what our government would think about that.