The Dearborn Free Press is the first local news organization I've been able to find that has mentioned the attack I reported here, but they've got some additional details, including the name of the suspect and a more accurate list of the charges against him.

Michael Mohamad Agemy will be in court August 3. However, he'll be facing justice in Dearborn's notorious 19th District Court, the same court that put us through a five-day trial for having a discussion with Muslims, and the same court that threw Terry Jones in jail for intending to hold a protest outside the Islamic Center of America (yes, the mosque where Agemy attempted to run down a group of street preachers). If he ends up in front of Judge Mark Somers, I'll be shocked if he doesn't walk on all charges.

Here's the story from the Dearborn Free Press. 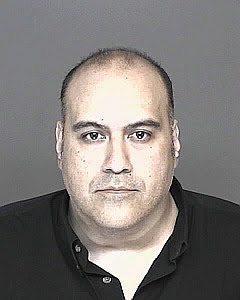 DEARBORN, Michigan - Michael Mohamad Agemy, a 47 year old Dearborn resident was arrested on June 17, 2012 near the Islamic Center of America on Ford Rd.

Many details on the case are unknown at this time. The arrest does not indicate a conviction. Under U.S. law a suspect is considered innocent until proven guilty.

However, a man named Michael Mohamed Agemy (same name) was arrested in 2003 in a major suburban drug ring roundup. The DEA report dated August 14, 2003 said: "Following a long term investigation into cocaine distribution throughout the Western and Downriver suburbs of Detroit, United States Attorney for the Eastern District of Michigan Jeffrey G. Collins and Acting Special Agent in Charge Gary Oetjen of the U.S. Drug Enforcement Administration (DEA) in Detroit announced an 11 count federal grand jury indictment of 22 individuals from the Detroit and Chicago areas as well as the Source of Supply in Mexico on drug trafficking charges. The investigation was conducted jointly between the DEA and Dearborn, Michigan Police Department with assistance from a number of local and federal law enforcement agencies."

That dude looks like a criminal. I wonder how the conversation went at the mosque after this:

I wonder if they are all members of that mosque. And these are only the guys who got caught.

That's the first Muslim "Michael" I've ever heard of. Apart from the Jackson one, but... ya know.

If Islam is indeed peaceful(as some claim) how can one explain this incident where a mob of 2000 beat a mentally unstable man to death & burnt him? This is just sickening!

The guy was arrested on Federal Drug charges where a serious amount of drugs where seized, and he is out 9 years later.

Somethings not right with this.

I hate it when a muslim bears a christian name. Well!! its part of the taqqiya ideology I believe.

"AFLC plans to file a federal civil rights lawsuit on behalf of Israel and the Christian group, whose constitutional rights were violated by the Wayne County Sheriff’s Office."

This guy must be running for Mayor of Dearborn.

More of this story is coming out.

Looks like he was just trying to stop the hate when he tried to run them over.