The tomato: a Christian or Islamic fruit?

Well now (unless this is a joke or a delayed april fool) tomatos are branded (according to some Muslims) a Christian fruit.

Some Muslims have even warned against either eating tomatos or to cut it in such a way as to make the cross appear. 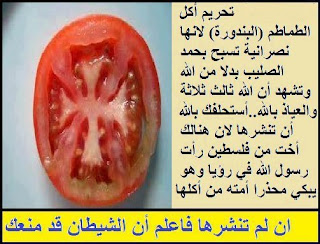 Yet now we have a slight problem! If the tomato is a Christian fruit, why is it that Allah tends to use the tomato as a source of communication? 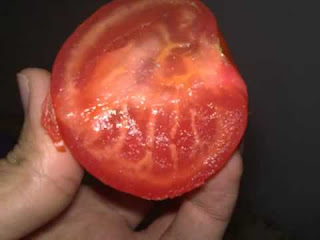 Ok, lets get this straight, Muslims (according to some), should not eat tomatos, yet they may buy tomatos and even cut them open; who knows Allah may have a surprise for you.

Muslims may buy, cut and eat tomatos, yet cut it carefully, very carefully and from the right side, less the tomato turns Christian. Following this rule, the tomato might even turn Islamic and reveal hidden messages about Allah himself!

Hence the tomato appears to be a very mystical thing, a transmitter of some sort that conveys to us messages from God and the devil, depending on how you open it.

How cool is that!

To be fair however, yeah, similar claims have flourished within Christian communities and other religions as well, such as the Jesus toast and the Shiva cow. However, since Muslims utilize such claims as a pointer to Islam, in their dawah approach, I thought the topic might be of some interest.

Yet it should make us ponder. If one of Jesus' primary tasks at his second coming consist of the abolishment and destruction of crosses, why is Allah revealing the cross sign in tomatos? Is it a tantamount to the crucifixion scene in the Qur'an, in which Allah deceives the world to believe that Jesus actually died and eventually six hundred years after reveals the error?

Will Jesus even abolish and ban the tomatos?

Posted by Hogan Elijah Hagbard at 2:15 AM

yeah... saw this news recently too.

the next thing we are going to hear is that pepsi represents please pay every penny saving isreal. Oh wait muslims have already done that instead of thinking it was from the original chemical added to it called pepsin.

video on what they did with pepsi, its obviously not named after one of the enzyme used to make. cough cough cough

Of course the tomato is a Christian fruit. Can't you see that!? Look at it. What do you see?

A white cross stands out in the middle for all to see. This is symbolic of purity.

It's a blood red tomato and that's no coincidence.

It's surrounded by seeds, which represents the seed that will also bear fruit following the juice flowing from the fruit.

It's a young tomato, not old and dry but in its prime.

The cross is enclosed by two diagonal nails at the top and two going upwards. You don't need to be a genius to work that one out. This is further proof the JW's are wrong in insisting no one was put to death on a cross but were instead impaled on a torture stake. The tomato destroys that particular erroneous argument.

Then there's the cross entombed in the middle of a thick walled layer of rind with no possible way out, humanly speaking.

Noticeable is the gentile writing surrounding the tomato. It was the gentile peoples who carried out such executions. That the writing is in a variety of colors - as is also the diverse colors in this scene - is a pointer to the many shades of peoples responsible for the tomato's demise. We see black, brown, yellow and white. The blue would be the mood of any soul just before crucifixion.

The writing does not fully encompass the tomato. This tells us there was a way out for the fruit after being cut down.

The border in which the fruit is presented here is black, which speaks volumes about the darkness which encapsulated the tomato in its final moments. To the top left we see the darkest spot of the picture. This is the darkest hour before the tomato bursts out into the white (light) where it is faced with further opposition with words like: "Some Muslims have even warned against either eating tomatos or to cut it in such a way as to make the cross appear." Thus arguing against believing in the story of the tomato.

If you look carefully (zoom in), you'll see a single seed on the bottom leftspike, just on the edge of the rind. Here we have what was known as, "The Judas Seed," yes. This is the one which could have made it but just missed out and fell by the wayside.

Now to the bottom picture.

Though this picture is surrounded in darkness one cannot help but notice the light shining on the hand.

Finally, take note of the symbolic number of the site: 1442800.family_blessed_by_allah_in_tomato/.

Here's one in the eye!

Thanks for the laugh today.

Hi.
Had this story a while back, my guess it's a plot from the Knight Templars they brought a GM tomato plant to the Holy Land to propagate christianity. :)

Oh wow..I've never noticed it. Anyway...I love that cross symbol inside the tomato :)

Common Guys look it has a cross it must be Christian. If Tomatoes are Christian and Catchup comes from tomatoes could catchup represent the "Blood of Jesus"? I am a Christian and in no way am I making fun of Jesus I just want to use some Muslim logic here.

Actually, I'm pretty sure that the Facebook page that was posted on is a satirical page where the owners post really silly stuff posing as muslims, to make fun of muslims. It is quite funny though.

We'll I have a favourite fruit now lkl