Muslim Attempts to Murder Daughter for Being Disobedient . . . in Arizona

Even though he didn't succeed in killing her, the girl's father, mother, and sister held her down and tortured her.

The glories of multiculturalism. 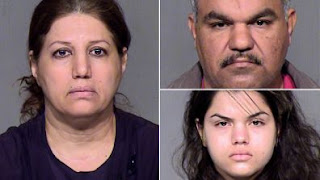 PHOENIX – An Iraqi mother accused of beating her teenage daughter for not going along with an arranged marriage pleaded not guilty Monday in a case police said involved burning the teen on her face and chest with a hot spoon.

The daughter, 19, refused to participate in an arranged marriage with a 38-year-old man, authorities said.

MyFoxPhoenix.com cited court records showing that on Feb. 7 Mohammed Altameemi got mad at his daughter because she left night class with a boy. The father picked her up at school and took her home.

He is accused of cutting his daughter’s neck with a knife. Police say he admitted he was trying to kill her, but Tabarak Altameemi intervened.

They, other siblings and Farhan then allegedly taped the 19-year-old's mouth, bound her hands and body with rope and beat her.

The altercation over the arranged marriage occurred in November, MyFoxPhoenix.com reported. At that time, the victim's sisters and mom allegedly held her down and beat her, with Farhan accused of putting a hot spoon against her daughter's face and chest.

"I swear I didn't hurt her, only slightly, just like any parent would do to their children. Nobody would hurt their own children. You can ask her if she can be here with me," Farhan told a judge, according to a translation. (Source)

Look how happy Islam makes them - it's written all over their faces!

Even if you would classify them as nutty people, there seems to be more of them that identify themselves with Islam. Now, that is a PC way of not offending sensitive Islamists.

What I really meant to say is that Islam makes people nuttier and crazier than most other religions/ideologies. If there is a horrific or terroristic story these days, it is probably involves Muslims.

Hey David, this is off topic but I was wondering if you have done any research into Surah 61:6?

I've been sharing the gospel with a Muslim friend and he mentioned this verse the other day after we were discussing Surah 46:9

They were acting as if the U.S. is already a Muslim country and they can get away with that kind of thing!

Maybe their lawyer could motion the court for a Change of Venue into Pennsylvania and have this case heard in front of Judge DOOFUS (I mean Judge Martin of course). That way he could impose his Sharia Law on the errant daughter and continue her punishment on behalf of her parents.

I wonder if CAIR will make a comment!!?? Very doubtful though and if they do, it will come from the corner of their mouths in a very low tone!!

Sorry guyz another important news of Islamo-Fascism Taqiiya , If you go to a Islamo-Fascist web named "Calling Christian" you will find a news about The Arresting of some Chritians for being alleged in ATTEMPT TO BLEW THEIR OWN CHURCH..(http://callingchristians.com/2012/02/27/boko-haram-more-christians-arrested-attempting-to-blow-up-church-nigeria/)

Apparently this "alleged dirty accusation" doesn't stand long because the Christian Association of Nigeria(CAN) in that region where this atrocity happened has refuted those accusation and demand for the releasing of those christians that have been framed
(http://www.vanguardngr.com/2012/03/bauchi-can-denies-alledged-arrest-of-members-with-explosives/)

CAN YOU IMAGINE HOW DESPERATE, LOW & DIRTY MOSLEM CAN BECOME IN THEIR EFFORT TO ATTACK CHRISTIANS BY ACCUSING CHRISTIAN BLOWING THEIR OWN LOCAL CHURCH?

A Tennision
I have already answered you on a previous post.

The daughter looks like a chip off the old block: same ugly scowl as her father.

All you have to do is look at the mother's face to see the kind of islamic life she's had to lead.