And we know that, since Muslims don't support terrorism, they won't be offended by this movie. 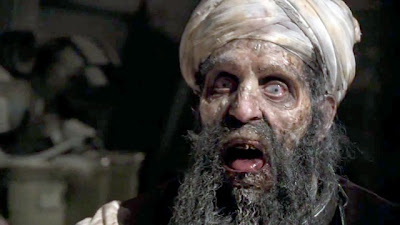 ABC NEWS--A Utah production company announced today that it has shot a movie based on the premise that Osama bin Laden rises from his watery grave and leads an army of zombie terrorists in a violent jihad of the undead.

In the feature-length film, "Osombie: The Axis of Evil Dead," a NATO Special Forces unit races to defeat zombie bin Laden and his flesh-seeking militia, while also stopping the infection from spreading to even more terrorist corpses.

According to the film's executive producer, Kynan Griffin, the script was written before the real al Qaeda leader was killed last May; once that happened, Griffin said, it was "too good to pass up."

"We've just had a lot of fun with it," Griffin said. "We had some great special effects makeup people that had done a lot of Hollywood work. Lots of actions, lots of zombie violence." (Read more.)

Okay, okay. We have a chance here for a whole series of jokes in the vein of "What's the difference between a brainless jihadi and a Zombie?" (not that we'd want to offend any of the adherents of the Religion of Peace)

So, I've got one that's particularly brainless:

KAFIR AND NOT looking for work as a comedian...

This is great but it would be even better if someone in Hollywood with some integrity would have the pluck to make a movie on the evil life of the prophet of Islam, based on the Hadiths and the koran. They would do the world a huge favor in exposing the true face of the cult of Mohammed.

Because of fear of retalliation, Islam is always potrayed in a false light to appease the Islamic oil rich world, due to which more and more gullible westerners are inexorbally drawn into this dark abyss.

What we need to combat Islam is some good old fashioned honesty, not the patronizing lies of multiculturalism and our deceptive vote-seeking politicians.

Islam was recognized as evil by many leaders and statesmen of the old world.

Here is what Winston Churchill had to say about Islam..
"...the influence of the religion (of Islam) paralyses the social development of those who follow it. No stronger retrograde force exists in the world. Far from being moribund, Mohammedanism is a militant and proselytizing faith. It has already spread throughout Central Africa, raising fearless warriors at every step; and were it not that Christianity is sheltered in the strong arms of science - the science against which it had vainly struggled - the civilization of modern Europe might fall, as fell the civilization of ancient" Rome."

But Alas! the civilization of modern Europe and other cowards (like Bart Erhman) have either conceded or are fearful of Islam, and so must fall as did ancient Rome.

Well, the little Iranian President says the Mahdi (political Islamic messiah) will be killed by the infidel (to Islam) and be brought back to life . . . Is there a stunt double waiting to crawl out of the well and be "reborn?"

lets go back and thisk whats gonna happen..........refer back to the South Park Mohammed episode

have none of us referred back to the South Park Mohammed episode???