Ayaan Hirsi Ali: The Global War on Christians in the Muslim World 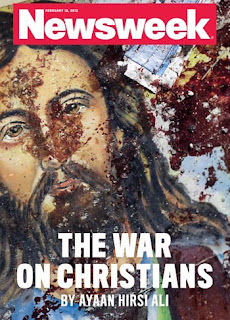 NEWSWEEK--We hear so often about Muslims as victims of abuse in the West and combatants in the Arab Spring’s fight against tyranny. But, in fact, a wholly different kind of war is underway—an unrecognized battle costing thousands of lives. Christians are being killed in the Islamic world because of their religion. It is a rising genocide that ought to provoke global alarm.

The portrayal of Muslims as victims or heroes is at best partially accurate. In recent years the violent oppression of Christian minorities has become the norm in Muslim-majority nations stretching from West Africa and the Middle East to South Asia and Oceania. In some countries it is governments and their agents that have burned churches and imprisoned parishioners. In others, rebel groups and vigilantes have taken matters into their own hands, murdering Christians and driving them from regions where their roots go back centuries.

The media’s reticence on the subject no doubt has several sources. One may be fear of provoking additional violence. Another is most likely the influence of lobbying groups such as the Organization of Islamic Cooperation—a kind of United Nations of Islam centered in Saudi Arabia—and the Council on American-Islamic Relations. Over the past decade, these and similar groups have been remarkably successful in persuading leading public figures and journalists in the West to think of each and every example of perceived anti-Muslim discrimination as an expression of a systematic and sinister derangement called “Islamophobia”—a term that is meant to elicit the same moral disapproval as xenophobia or homophobia.

But a fair-minded assessment of recent events and trends leads to the conclusion that the scale and severity of Islamophobia pales in comparison with the bloody Christophobia currently coursing through Muslim-majority nations from one end of the globe to the other. The conspiracy of silence surrounding this violent expression of religious intolerance has to stop. Nothing less than the fate of Christianity—and ultimately of all religious minorities—in the Islamic world is at stake. (Read more.)

Well it had to be said.

I wonder if she addresses the question in the book:

"Why doesn't the West do anything about it?"

I mean the fact is even these Islamist groups cant stop the reports and statistics coming out from Muslim countries regarding these atrocities.

Why didn't America do anything about Sudan? Why don't America accept all visas from copts? Just like they rejected the Jewish visas, sending boats and boats of Jews back home to Germany. Disgusting really.

They won't do anything for one simple reason, its payback time for that "whitie religion". And as everyone knows, majority's and whites can never be victims of "racism", "bigotry", "religious persicusion".
Another reason is that Christianity has been under direct and indirect attack for over 100 years, starting in modern time with charles lyell, followed by his disiple charles darwin. They just think that islam is doing them a favour by getting rid of those pesky Christians who keep reminding them of the morals they have abandoned.

After all, anyone who is prepared to do the dirty work to kill off all the Christians is ok in their books and worth allaying with.

Ah my bad. Misread that, not a new book of hers but Newsweek! That is excellent news.

I've said for a while that we need to coin the term "kuffarophobia" which is a far more accurate recognition of the direction in which hatred trends when it comes to Islam.

Derek shouldn't you be decrying this article since you claim that we get our morality from our nature. In others words Muslims are just being Muslims. That's fine Derek if being arbitrary makes you happy all blessings to you.

However, Wanna explain yourself?


It's kinda sad that I have to chase you around since you have decided to abort our exchange.


By the way do leprechauns exist?

I'm surprised she didn't mention the slaughter of upwards of 2.5 million Assyrian and Armenian Christians, committed by Turkish muslo-nazis, in the early 20th century, or that Christian women there were raped by Turkish muslimes, stripped bare, then crucified:

Ayaan Hirsi should've made her article more comprehensive, because it's not JUST Christians who are being persecuted and murdered in the name of Islam. Hindus, Sikhs, Bahais, Jews, Buddhists are all being murdered and persecuted in the name of Islam in such wonderful places as Indonesia, Malaysia, Pakistan, Bangladesh and Iran. Millions of Jews, Hindus and Sikhs have been ethnically cleansed from muslo-nazi states since the middle of the 20th century in the Indian sub-continent as well as the Mid-East and N. Africa.

Update on the Saudi Blogger he was busted in Malaysia trying to flee to the KUFFAR for protection.

Malaysia is going to repatriate him to KSA.

Looks like we might get a good old fashioned head chopping in KSA of one of their own. MASHALLLAH.

"As for what the West can do to help religious minorities in Muslim-majority societies, my answer is that it needs to begin using the billions of dollars in aid it gives to the offending countries as leverage."

Yeah, as if they will ever happen. As long as Saudia Arabia has a lot of oil, Pakistan is needed for the war in Afghanistan, they won't be losing aid from the West (America).

Iraq is in chaos. That's why the Christians are in danger there, at least the ones that are left.

I'll bet the stories we all read and hear about islamonazi persecution are only the tip of a very gigantic iceberg, after all, islamonazi states aren't known for recognizing freedom of the press, much less freedom of religion or freedom of speech.

here is what I was guessing from my previous comment ...

Killing is Syria started ... no surprise there ...

“To God's people everywhere:
The armed Islamist Opposition in Syria have murdered more than 200 Christians in the city of Homs, including entire families with young children. These Islamic gangs also kidnapped Christians demanding high ransoms. In two cases, after the ransoms were paid, the men's bodies were found.

Christians are being forced to flee the city to the safety of government controlled areas. Muslim rebel fighters and their families are taking over their homes. We need your prayers and we need them urgently.”

the war in Syria started by the blood merchant "Sunni cleric from Saudi and Kuwait" whom they issued Fatwa against the Shiaa Alawee Bashar Al Assad and made his blood OK!

I did mention about it before ...

This is the fruit of Islam ...