Several people have asked for a hard copy of Sunan Abu Dawud 3991, since Muslims don't want to believe Muhammad actually said that the sun sets in a pool of water. Here's a scan of the page: 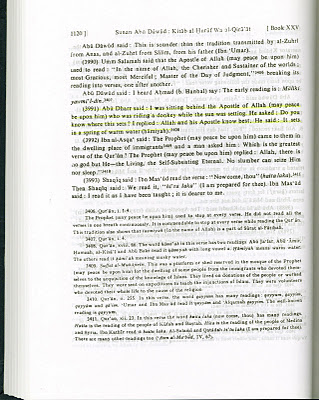 The Hadith in question reads:

Sunan Abu Dawud 3991—Abu Dharr said: I was sitting behind the Apostle of Allah who was riding a donkey while the sun was setting. He asked: Do you know where this sets? I replied: Allah and his Apostle know best. He said: It sets in a spring of warm water.


This means, of course, that Muslims aren't allowed to reinterpret the Qur'an's obviously false claim that Dhul-Qarnain reached the place where the sun sets, and found the sun going down into a pool of muddy water:

Qur’an 18:83-86—And they ask you about Dhul-Qarnain. Say: “I shall recite to you something of his story.” Verily, We established him in the earth, and We gave him the means of everything. So he followed a way. Until, when he reached the setting place of the sun, he found it setting in a spring of black muddy (or hot) water. And he found near it a people.


For a full discussion of these passages, see my video:

Thank you so much Dave! You are great!

I looked up cmje.org for Sunan Abu Dawud...

Then, in the next book 31 (Kitab Al-Hammam), I found that it starts from Number 3998...
http://www.cmje.org/religious-texts/hadith/abudawud/031-sat.php

So what happened to Number 3991 to 3997?
I don't know. Maybe that's why they call it "Partial Translation of Sunan Abu Dawud"..
How convenient.

I have the complete hadith in electronic form. It's there.

This could be true since he was levitated! ...

hold on let me re-calculate (crrrunch-crrrunch)

It doesn't add up!

What should I do?

Also the voiceover part, the part where you are talking about Muslims reinterpreting an inconvenient verse, and we hear something like voices of angels rising. Nice.

Someone gave me this on a disc but 3991 and others are missing. I looked on the www. but could only find 3991 as part of another e-book.

"I have the complete hadith in electronic form. It's there."

Can u share the address,Is there any eng translation with complete chain of narrators

This 3991 is in the above website.Can u provide me a site with name of narrators along with hadith

Thanks for the link.

Here is the Arabic for this hadith lest anyone doubt

It's number 4002 there (just like in the alternative translation of Abu Dawud which Sam Shamoun gave. He should probably add this link to his webpage)

Look at the reponse in this video :
http://www.youtube.com/watch?v=_7DluJ5zIaI
If you are smart enough to check his interpretation!

You can also find the Hadith and its Arabic original version here: https://muflihun.com/abudawood/32/3991

The same argument was just posted in this islamic forum: https://islam.stackexchange.com/questions/42928/how-do-we-reconcile-the-quaran-and-sunan-abu-dawud-with-the-fact-that-the-earth

Quran in the incident of Zul Qarnain in which it is stated,

Until, when he reached the setting of the sun, he found it set in a spring of murky water.2

The word Hamiah literally means dark marsh or mud carrying water beneath which causes the water to appear black.3

The literal meaning cannot be meant as the sun is much bigger than the earth or the ocean.

In the same way, Allah Taala illustrates the scene by describing the sun as setting in a muddy spring.4