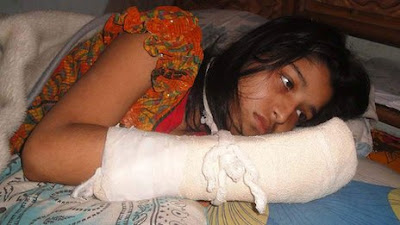 BANGLADESH--Human rights groups in Bangladesh have demanded a severe punishment for the husband of a young wife who allegedly cut off most of her right hand.

Police say Rafiqul Islam, 30, attacked her because she pursued higher education without his permission. 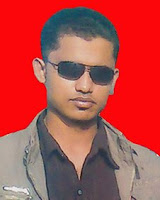 They say Mr Islam, a migrant worker, admitted to the crime shortly after returning home from the Gulf.

However there has been no independent confirmation from the suspect that he carried out the attack.

The incident is one of a number of acts of domestic violence targeting educated women in recent months.

Police say that Mr Islam, who works in the United Arab Emirates, tied up his 21-year-old wife, Hawa Akther Jui, earlier this month. He then taped her mouth and cut off the five fingers.

Doctors say the fingers cannot be re-attached and it appears that Ms Akther will have to live with permanent disfigurement.

"After he came back to Bangladesh, he wanted to have a discussion with me. Suddenly, he blindfolded me and tied my hand," Ms Akther told the BBC's Anbarasan Ethirajan from the town of Narsingdi.

"He also taped my mouth saying that he would give me some surprise gifts. But, instead he cut off my fingers."

She said her husband, who is not well educated, did not approve of her enrolling in a college for higher studies.

During their earlier telephone conversations, she said, he warned her of "severe consequences" if she went against his word. (Read more.)

Ladies and Gentleman....the religion of piece.

When is the state controlled media and the loonie left going to wake up on the barbaric practices of this vile system o beliefs. If they truly cared about human rights they would be up in arms about the continueous assalt on human dignity by Islamic practices.

The sad thing is she can't even divorce him until he says Talaq-Talaq-Talaq. If she requests him for divorce and he grants it than she is not entitled to her " Mehar payment" and she looses everything. This has been established by Sharia of Pakistan. Poor girl.

The dynamics of domestic violence have been studied in the U.S. for decades. What has been discovered is that a domestic violence abuser is immune to reason or equality in a domestic relationship. He sees his victim as merely an extension of himself, not a person with the right to ideas, feeling, and actions of her own but a possession to enhance him. The abuser isolates the victim and gradually punishes any indication of independence and forces the victim to cater to the arbitrary whims and needs and desires of the abuser. The abuser feels entitled to exert his will on the victim and to ridicule, abuse, torture, rape, even murder the victim but never takes responsibility for these actions, instead blaming the victim for such behavior and deflecting consequences to the victim. Despite laws to the contrary, society often aids and abets the abuser by also blaming the victim without protecting the victim from abuse. Most domestic violence victims are murdered by their abusers when they try to leave them, especially if they have no one to help them.

In Islam, women are seen, as Mohammad declared, as half as valuable as men and deficient in reason. In the Qur'an husbands are told to plow their fields [wives and those sex slaves they posses] as they see fit. Husbands are also told to punish and beat their wives merely on the "fear of disobedience," so wives are expected to obey their husband's every whim or be punished and/or beaten. That does not leave much room for independent thoughts or actions. Women are also made responsible for any sexual crimes committed against them, which can include such things as talking to a man or standing too close to a man or simply that her husband is jealous of her, and can be stoned to death on the mere allegation of impropriety. Such punishment comes with the accuser, anyone he might happen to have to support his assertion, and the imam who pronounces sentence, and the woman is not allowed to speak on her own behalf because it is considered improper (too tempting to men) for women to speak about sexual things in public. These are Islamic principles enforced socially by Sharia law, and the veils women wear are an indication that they take, willingly or not, responsibility for the lust of men. This responsibility goes beyond being "modest" and she can be covered from head to toes with only her eyes showing and still be punished for having seductive/attractive eyes. Women who try to leave their Muslim husbands can be killed for apostasy or for appearing improper being without their husband's permission.

Sharia law enforcement of Islam codifies domestic abuse of women. Islam appeals to domestic violence abusers as it gives them impunity for their crimes against women. Islam also conditions women to take responsibility for their own abuse. Islam enforced by Sharia law is an inhuman system with no respect for God-given reasoning powers bestowed on human men and women and even forbids reasonable analysis of itself. Islam is simply a domestic violence abuser's dream.

Also sad to here is that this has nothing to do with Islam.

Once again Islam proved its a peaceful religion!

David-- I'm sure you've covered this somewhere on your site before, or maybe Sam has on his site. But I'm wondering something. Given the enormity of stories like this which come out of Bangladesh, Pakistan, and Saudi Arabia, why do you think that Westernized (By that I mean American, Canadian, European) women would CONVERT to Islam? Why would an American free woman convert to a religion that is clearly so in direct contrast against woman's rights. The stuff they are spitting out-- Khalid Yasin has a DVD and on it he gives clear instruction on "how to beat your wife". I've seen it. I don't have any answers, but it might make for a nice video discussion on your YouTube channel. I just don't understand how a woman would willingly want this.

This is what muslims means by peace.. This is real peace..

Will Lowe's cave in to these Muslims? Send them a message through this link. http://barenakedislam.wordpress.com/2011/12/15/ask-lowes-not-to-capitulate-to-a-meeting-with-the-shakedown-artists-of-cair/

The Muslim in the video is Dawud Walid, Director or CAIR, and director of the Dearborn Mosque. Send him your thoughts also:http://dawudwalid.wordpress.com/

It does, because it is the mindset of Islam that produces the mentality that the woman is just chattle and the man can do as he pleases with her.

See thou not that We have set the Evil Ones on against the unbelievers, to incite them with fury? (19:83)

Bukhari (62:81) - "The Prophet said: "'The stipulations most entitled to be abided by are those with which you are given the right to enjoy the (women's) private parts (i.e. the stipulations of the marriage contract).'"

Its sad to know this!Because today was our victory day.In 1971 16th December we got independence from Pakistan and emerged as a new country name Bangladesh.But where is that freedom when wives are being treated worse than animals?

Though this is off-topic but reading a question often asked by Muslims,like Shabir Ally,it is:"Do you oppose GENOCIDE,and if so then what of that of the CANANiTES?"

I have an answer to the objection to the Cananite genocide.It is in French but you can translate it using Google Translate:

As for being against genocide in itself my answer is NO.

The reason is there are times when an INDIVIDUAL,like HITLER,would deserve death,so it is technically ossible there can be a time a collection of folks,a nation,is worthy of death.

It is written that they threw BABIES LIVE into a FIRE as a SACRIFICE to their gods.The SAME thing is said to have happened in AUSCHWITZ,read the article.

Even at the last moment it was technically possible for a Cananite to save himself by repentance,asking for forgiveness,losing his body but saving hi soul.

Okay, David. I think we've all gotten the point. Can you turn off the sarcasm now? pleeeaaase?

BBC Knows that but I think you may right all culture is not equal but we have divided always into two parts humanism and barbarism this think not to belong to any religion because five fingers are not equal according to logic or reality our organization tutorshelponline.com has all types of human but not different all are human and human being and work together I think you may understand that problem.